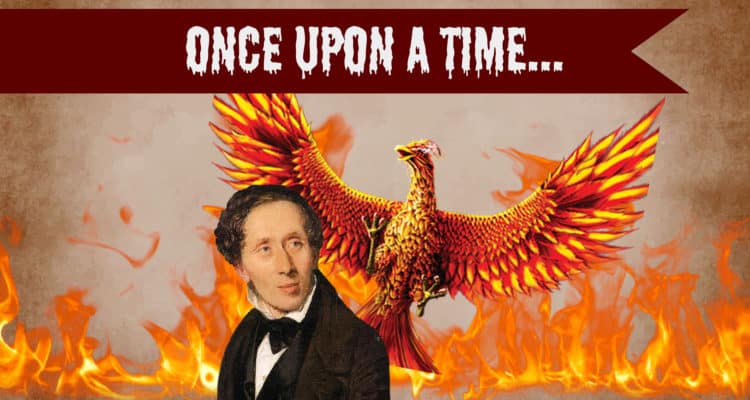 Born in 1805, Hans Christian Andersen was a Danish author until his death in 1875. Andersen is most famously known for his fairytales, or rather the fantastic tale. Andersen is the author that brought children the adventures of inanimate objects brought to life. Andersen forever changed the way fairytales were written when he began bringing ordinary house objects to life to enrich his tales. But, the fairytale we’re talking about in this edition of Freaky Fairytales is slightly different.

The Phoenix Bird is a children’s tale of immortality after death. Andersen’s tale talks of Eden, of paradise, and how the fall of Eve and Adam, was the creation of the Phoenix. When Adam and Eve were cast out of the Garden of Eden, embers from the angel’s flaming sword fell into a bird’s nest and while the bird died, the egg did not. Instead, a phoenix was born from this egg.

Andersen has written a beautiful tale of how the phoenix bird travels from country to country, and therefore, from religion to religion, never truly seen but always there. The phoenix bird is known to all and is the representation of everyone’s different and unique path to their eternity after death.

The Phoenix bird, dost thou not know him? The Bird of Paradise, the holy swan of song! On the car of Thespis he sat in the guise of a chattering raven, and flapped his black wings, smeared with the lees of wine; over the sounding harp of Iceland swept the swan’s red beak; on Shakespeare’s shoulder he sat in the guise of Odin’s raven, and whispered in his ear ‘Immortality!’ and at the minstrels’ feast he fluttered through the halls of the Wartburg.

The Phoenix bird, dost thou not know him? He sang to thee the Marseillaise, and thou kissedst the feather that fell from his wing; he came in the radiance of Paradise, and perchance thou didst turn away from him towards the sparrow who sat with tinsel on his wings (Andersen 408-409).

The phoenix is known to all because whether you see through his guise or not, he was present in your life, as Andersen has written above. Andersen shows the phoenix’s representation of our differing paths to eternity by showing how the phoenix appears in everyone’s life differently. He shows that while the phoenix comes into our lives through a guise, it is each individual’s right to accept or deny him.