Inside there are contentious city council meetings and ongoing lawsuits, online there are growing petitions, and outside there are protests on the streets and massively long police lines. But what was the spark that ignited this fire?

Well, an hour long story-time hour for kids. How awful.

Yes, they should, but many are arguing that certain people shouldn’t be doing the reading.

In an effort to promote both a love of reading and also tolerance and acceptance, Drag Queen Story Hour was set up, during which Drag Queens sit down and read books to children. 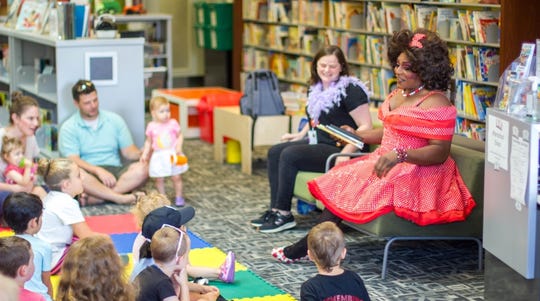 Image Via The Coloradoan

They have thirty-five chapters nation wide and their performers undergo training and background checks before stepping foot in the classroom. As Jonathan Hamilt, a co-founder of Drag Queen Story Hour in New York, told NBC he hopes that.

[W]hen [children] grow and see someone different down the street, they won’t treat them any differently for how they look or act.

In the meantime, people are freaking out. How bad is it? How crazy are these story hours? Check out NBC’s video below:

For all you videogames buffs out there, and also mythology fans, you’ve basically just hit the jackpot. The new version of God of War games are taking on a new outlet of myths and tales and fans are excited pick up their PS4s.

Image Via Ocean of Games

According to Newsweek, in a recent interview, Sony reps confirmed that the franchise will be moving into the world of Norse mythology. The first trilogy of the action-adventure game full of epic war scenes followed Greek mythology. This is when Kratos was seeking revenge against Ares, the Greek God of War, eventually moving onto Zeus. Now, Norse mythology, with history connecting to the swift Vikings will bring on brand new battles.
Sony Santa Monica’s Senior Community Strategist Andrew Kaufman discusses what players could expect as their characters delve deep into this powerful universe:

“We have ideas in our head where we want to go… Right now we know we want to stay in the Norse universe. We want to explore this relationship between a father and son, we know they have a very specific destination to get to. But we also know our fans are very savvy and smart. We wouldn’t just add atreus to God of War if it was just a one-off. This is a fundamental, big change and this being the beginning of Chapter 2, which allows Kratos to evolve, allows Atreus to come in as a new characters, as a new, vital and important character.”

Check out their interview below to see how the creators thought up the theme and inspiration. God of War is due to release on April 20th; start brushing up on your mythology books now!

If you grew up in the US in the past forty years, you probably can’t say “conjunction” without then singing an entire song. We all have a show called Schoolhouse Rock! to thank for that. Covering topics like math, U.S. history and politics, science, and, of course, grammar, Schoolhouse Rock! has been an important part of every teacher’s toolbox—especially if they want three minutes of rest.

For kids, though, Schoolhouse Rock! nestles into their heads. I’m not sure if it’s a great way to teach, but the show turned out some killer tracks. Setting aside the grammar songs for a second, “I’m Just a Bill” and “Three Is a Magic Number” are straight classics. The grammar songs deserve especial thanks for their contributions to our collective mastery of the English language.

Written by Lynn Ahrens (Academy Award-winning songwriter for Anastasia), this is a catchy, Dolly Parton-esque tune that walked me through what exactly a noun was. The song calls out to then-relevant musical acts like The Beatles and Monkees, and it’s just very endearing.

This bluesy song would have been written by Randy Newman if someone had called him. Kidding, but really, it sounds like a Randy Newman song. Also, if you know Schoolhouse Rock!, then you know this song.

In this song, three generations of the Lolly family own and operate a store that apparently sells adverbs. I’m not sure it’s a sound business model, but they do have a great jingle. Also, I think whoever was animating this had a tough time drawing faces head-on because all of the faces are facing sideways.

That’s a name. This song’s great, and it’s all about pronouns. Also, it features a girl falling in love with an aardvark. The aardvark shares the love. It’s very Shape of Water-esque.

“Hey, that’s not fair, giving a guy a shot down there!” Reginald says, after being injects in the butt by a mysterious doctor, without the doctor even introducing himself. Without even a hello, the doctor sticks little Reginald with a needle in his buttocks. But besides that, this song is also about interjections. Yikes!

Movie adaptations of books are not even a dime a dozen—they’re just a dozen. Almost every movie is, in some way, based on literature. Less common is the folkloric video game adaptation. They’ve gone somewhat out of fashion as games have become increasingly expensive to create. But they were the thing to do in the 80s and 90s, and it’s a good thing too. Some wonderful memories for dweebs and dorks of a certain generation come from video game adaptations of equally nerdy novels. Here are seven notable ones!

Before its underwhelming 2003 movie adaptation, Crichton’s time-traveling adventure was made into a PC game. It was developed by Crichton’s own studio, called Timeline Studios, which was dedicated to adapting his novels into video games. Crichton served as the game’s director and even designed parts of it. Unfortunately for all involved, the game tanked. Timeline Studios shut down soon after.

This one’s more of an upper. The video game series based on Polish writer Andrzej Sapkowski’s epic fantasy novels have become smash hits. Not only do they sell well, the franchise is also a favorite among critics. 2015’s The Witcher 3: Wild Hunt is often cited as one of the greatest role-playing games ever, in fact. Because of the video games, Netflix is developing a TV series based on Sapkowski’s novels.

It might be a little generous to say Visceral Games’ 2010 is an adaptation of the Divine Comedy, it certainly does pull elements from the first canticle, the Inferno. This game is essentially an attempt to piggyback off the success of the God of War franchise, which pits a Spartan warrior against all of Greek mythology. Dante’s Inferno is bloody, grim, and totally humorless. It’s also kind of fun.

2006’s The Godfather generated a lot of buzz for a bunch of reasons. First of all, it’s less an adaptation of Puzo’s novel than Francis Ford Coppola’s film, which displeased both the Puzo estate and Coppola. Puzo’s son sued the Paramount over the game’s release, saying his father’s estate was entitled to money, which he won. Coppola also disapproves of the game, straight up saying, “I disapprove.” The game fills in some of the sidestory of the film, and features a lot of the returning cast, including James Caan and Robert Duvall. It was also notable as Marlon Brando’s last acting role before his death, as he recorded dialogue. Unfortunately, Brando was so sick at the time that the dialogue was unusable.

5. Douglas Adams’ The Hitchhiker’s Guide to the Galaxy

Beginning as a radioplay, Adams’ Hitchhiker’s series has spawned movies and, yes, a 1984 video game. It’s a text-based adventure game that follows the first book’s story, telling the story of how Arthur Dent meets Ford Prefect, Zaphod Beeblebrox, and Trillian. Best of all, it’s all text, so it’s basically like reading a book! Actually, that’s not the best thing―the best thing is that you can play it right now for free! Check out this epic here.

Confusingly, this game was released nine months after Peter Jackson’s first Lord of the Rings movie despite not at all being associated with the movies. Confusing things further is that video game company Electronic Arts went on to release games based on the next two Jackson movies, The Two Towers and The Return of the King. So there are actually three Lord of the Rings games, but the Fellowship of the Ring is a standalone title that has nothing to do with the latter two releases. Copyright law makes sense, etc.

The Goosebumps books inspired a whole series of video games, and they’re interesting for a couple of reasons. First off, 1996’s Escape from Horrorland is a proper sequel to One Day at Horrorland, one of the best-known Goosebumps books. It’s kind of forward-thinking of Stine to allow a sequel to one of his most successful books to shift mediums. Secondly, the game featured, like, weirdly A-list actors. Both Isabella Rossellini and Jeff Goldblum lent their voices to the game. Then again, this shouldn’t surprise anybody familiar with Stine’s wiley charms.

Charmed, I’m sure. | Image Via IMDb

In December, the Potterverse was a-buzz with the news of an absurd Harry Potter book, authored not by J.K. Rowling but by a bot. Some absolutely hilarious illustrations followed, and now an animated video of the strange events in the book has been made!

Harry Potter and the Portrait of What Looked like a Large Pile of Ash in video form is pretty funny. Even though I personally feel that they should have used Megan Nicole Dong’s illustrations, this video is pretty good. I especially enjoyed their interpretation of Hermione’s immortal words, ‘The password is BEEF WOMEN!’ I mean, I don’t know what I expected, but I was happy with it.