Going on a road-trip? Or maybe your eyes are just too tired from looking at screens all day? Try one of these great audiobooks!

END_OF_DOCUMENT_TOKEN_TO_BE_REPLACED

Sometimes it’s easy to forget that reading doesn’t always have to be you, a book and a comfy seat. More so than ever before, people are listening to their literature on laptops, on smartphones, and on the go. Audible is the best option for this, as it’s available across plenty of devices with a wide range of titles.

Audible has released a map that takes a look at 2019 listening data to see which titles were “more uniquely popular in some states compared to the rest of the country”. Our map below shows each state’s top Audible titles from 2019.

The shortest route across the US in a car would take four days or ninety-six hours. Forget about your killer soundtrack and instead, think about how many audiobooks you could get through in that time! If you wanted to do it properly, you could go state-by-state and take on each state’s favorite audiobook as you move. Luckily, Audible and Bookstr are here to help. The above infographic shows us which audiobook has been most popular (i.e. listened to more than any other) in each US state. One thing is for sure, self-help is popular country-wide, with many states learning how to Stay Sexy, set Atomic Habits and Not Give a F*ck. George R.R. Martin reigns in several states, proving himself King of The North(east). Fiction and non-fiction are popular all over the country, with fantasy and celebrity novels not contained to any one region.

Now that you have all you need for a literary road trip across the United States, fill up the tank, download Audible and get moving. Happy listening!

Here are the titles by state:

Maryland  The Woman in The Window by A.J. Finn

Massachusetts Summer of ’69 by Elin Hilderbrand

Delaware Where the Crawdads Sing by Delia Owens

Tennessee The Road Back to You by Ian Morgan Cron, Suzanne Stabile

Illinois Life Will Be the Death of Me by Chelsea Handler

Iowa Take Control of Your Life by Mel Robbins

Missouri The Institute by Stephen King

Oklahoma Killers of The Flower Moon by David Grann

Kansas A Clash of Kings by George R.R. Martin

Utah Harry Potter and The Chamber of Secrets by J.K. Rowling

Arkansas Before We Were Yours by Lisa Wingate

Florida How To Win Friends & Influence People by Dale Carnegie

Michigan A Storm of Swords by George R.R. Martin

Montana The Tattooist of Auschwitz by Heather Morris

Arizona The Dichotomy of Leadership by Jocko Willink, Leif Babin

South Carolina The Wife Between Us by Greer Hendricks, Sarah Pekkanen

Louisiana A Game of Thrones by George R.R. Martin

New Jersey Unfreedom of The Press by Mark R. Levin

You can explore it even closer below:

Created by Parisha Patel, who you can find here and here. 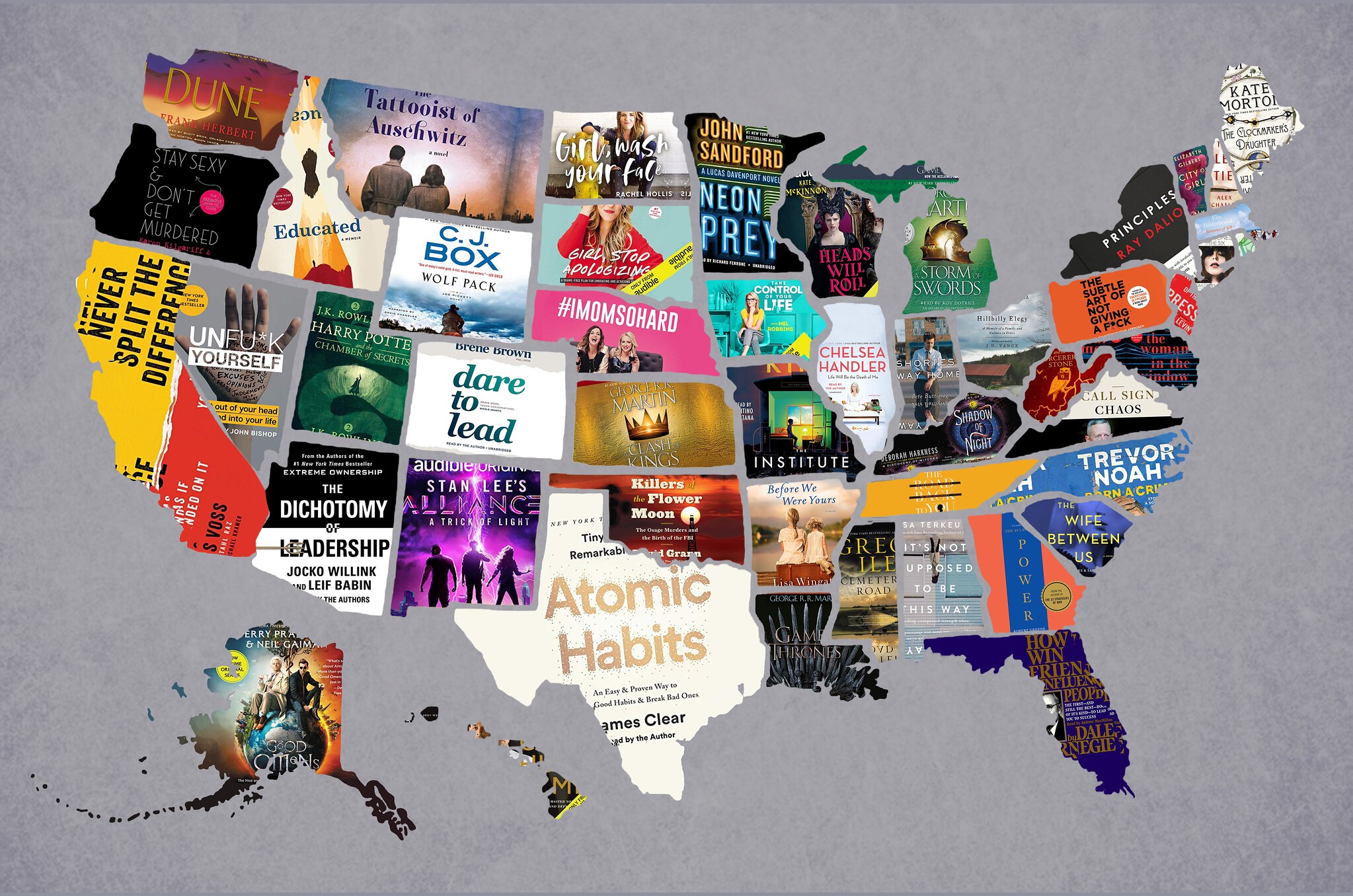 All images via PARIsha patel

Reese Witherspoon said on The Daily Show that books offer better representation for women than movies or TV shows, and her production company is working to bring more women onstage.

END_OF_DOCUMENT_TOKEN_TO_BE_REPLACED

Each week, Bookstr scans bestseller lists across the Internet to learn what people are reading, buying, gifting, and talking about most — just so we can ensure consistent, high-quality recommendations. This week's nonfiction picks range from the origins of humanity to the fine print of computer programming. Looking for a different genre? Check back next week for new picks, or send us your ideas and we'll do our best to curate hot titles.

END_OF_DOCUMENT_TOKEN_TO_BE_REPLACED

is being adapted for the big screen, and Lupita Nyong’o has been confirmed for the role of Noah’s mother, Patricia.

When Noah was born in South Africa in 1987, the very fact of his birth was a crime. His mother Patricia Nombuyiselo Noah was imprisoned and fined, due to the fact that she was black and Noah’s father, Robert was white. Robert moved back to his native Switzerland, and Patricia subsequently had two relationships, both of which were abusive. The second relationship ended in her estranged husband shooting her in the head, an attack which she miraculously survived.

Trevor Noah will produce the film along with Norman Aladjem, Derek Van Pelt, and Sanaz Yamin of Mainstay Entertainment, and Lupita Nyong’o.

Noah’s book was released in 2016 and has won the James Thurber Prize for American Humor as well as two NAACP Image Awards. His follow-up memoir will be released this coming November.

Lupita Nyong’o is also attached to an upcoming adaptation of Chimamanda Ngozi Adichie’s book Americanah, which Nyong’o will produce and star in.