If you’re like me, an anxious contradiction suffering from a hint of narcissism induced by a lingering quarter-life crisis, then you may often feel like time is running out. It’s not, we know that; we just figured we’d accomplish everything we ever dreamed of before the age of thirty…

The one thing that calms us and brings us together, the thing we can always take solace in, is the power of stories.

This begins when we’re young; reading stories like Peter Rabbit, The Ugly Duckling, Little Red Riding Hood, perhaps even more subversive stories like The Light Princess, The Princess and The Goblin, Zeralda’s Ogre, or Otto: The Autobiography of a Teddy Bear. Later some of us move on to comic books about superheroes achieving the impossible, defying limitations. Now we read denser things, fiction that aims to dissect the human condition. In the end, nothing beats the didactic nature of a child’s tale. The purpose of these disjointed introductory paragraphs is to bring to you the unfortunate news of legendary artist, Tomi Ungerer‘s death—a man who understood Imagination’s ability to eliminate fear.

An article on The Guardian‘s website, written in 2012, discusses the legendary, yet under-appreciated children’s book innovator, refering to how Ungerer’s humor could be described as “crazy” how his work contains “surprising” and “inexplicable” details created by a sometimes controversial, and truly wacky soul. The author of the article describes the man as apologetic for his nature upon meeting him; spouting countless aphorisms, and energy propelled by the type of insecurities that plague the wisest of men. Ungerer describes his approach to children’s literature:

“Curiosity is vital. The finest gift you can give your children is a magnifying glass, so with a little effort they can make their own discoveries.” To make it too easy is to curb the instinct to explore.

The French author and artist seemed to epitomized the expression “tongue in cheek.” He was aware of himself and of the world, he understood the power of language and visuals. His work subverts genre expectations, particularly in regard to his children ‘s books, as his stories convey their own brand of social satire. What would appear to be simple, relatable stories carry layered messages that pull your soul in the right direction. 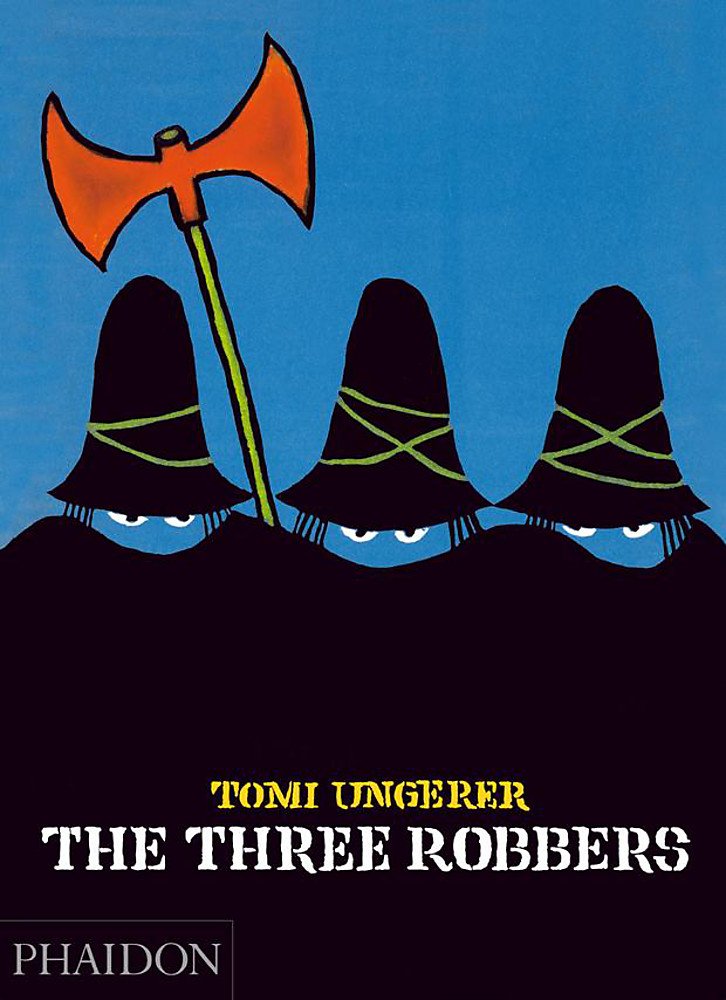 Whether it be his story Moon Man, about an alien who just wants to be accepted by humanity or The Three Robbers, about a girl who turns greed on its head, the books are charming and relatable, entertaining to both old and young. He was one of the pioneer’s of the age-defying child’s narrative, the type of stories parents can read with their children. The types of stories that remind adults that maybe they don’t have to grow up in the traditional sense; that wonderment and political naivety of a child may be relevant in the most excruciating of times…

Tomi Ungerer became the first ever Ambassador for Childhood and Education for the Council of Europe and has a museum dedicated to him in Strasbourg: a first for a French artist. His experiences as a child living in German-occupied France inspired the book Tomi: A Childhood Under the Nazis and shed a light on the perspective of a man who hated only a couple things in this life: intolerance and discrimination. In 1976, Ungerer moved to Ireland with his wife and recently died in Goleen, Co Cork at the age of eighty-seven.

People have reacted to his passing on Twitter, honoring Ungerer:

Sad to hear that french illustrator and author Tomi Ungerer has died. Proud to having worked on the film version of "The Three Robbers" some years ago that was nominated for best sound design. I grew up with his books and it was a child's dream come true. pic.twitter.com/somTzYmqFs

Thanks for the books, Tomi Ungerer. RIP pic.twitter.com/rDenIUIEl0

#BookIllustrationOfTheDay is in honour of Tomi Ungerer, who died yesterday. Sometimes bonkers, sometimes controversial, always fascinating, Ungerer was one of the innovators of modern picture books, a hugely influential force. Here's a tender scene from "Moon Man" (1966). pic.twitter.com/sjkTV3UA4T

It was a tweet I found on Tomi Ungerer’s personal Twitter page that moves me the most; the following video contains an interview with Ungerer, where he expresses one of the most optimistic and inspiring outlooks on death I think I’ve ever had the great pleasure of hearing. Ungerer’s legacy was sculpted by a man full of life, a life unaffected by superficial things like time and age: he was a painter, writer, intellectual, folk hero, legend, a god damn superhero with the power of imagination.

RIP our beloved Tomi. Words escape us at this difficult moment but in the end, Tomi says it best. Yvonne, Aria, Pascal, Lukas and Phoebe Ungerer.