Today marks the fifty-second publishing anniversary of Peter S. Beagle’s The Last Unicorn. Widely seen as one of the best fantasy novels of all time, the novel follows the tale of a brave unicorn, who believes she is the last of her kind in the world and undertakes a quest to discover what has happened to the others. Since the first publication, there has also been a comic book series and a movie adaptation, with the screenplay written by Peter S. Beagle himself, and an amazing song cover by Ninja Sex Party. Now, I may be a bit biased, but I absolutely adore The Last Unicorn. I grew up watching the movie more times than I can count, and read my copy of the book until it literally fell apart (I’ve replaced it twice since). Along with myself are many other fans that keep going back to this magical story because there is something new to be discovered each time, and it never fails to remind the reader that there is magic all around them, even if they can’t see it. These are dark and scary times we are living in, but hopefully, these quotes will remind you to keep the magic and hope you have alive!

“Great heroes need great sorrows and burdens, or half their greatness goes unnoticed. It is all part of the fairy tale.”

“As for you and your heart and the things you said and didn’t say, she will remember them all when men are fairy tales in books written by rabbits.” – Schmendrick the Magician

“There are no happy endings because nothing ends.” – Schmendrick the Magician

“Men have to have heroes, but no man can ever be as big as the need, and so a legend grows around a grain of truth, like a pearl.” “But I’m always dreaming, even when I’m awake; it is never finished.” – The Unicorn/ Amalthea

“No. My lady, I am a hero. Heroes know that things must happen when it is time for them to happen. A quest may not simply be abandoned; unicorns may go unrescued for a long time, but not forever. A happy ending cannot come in the middle of the story.” – Prince Lir “I can never regret. I can feel sorrow, but it’s not the same thing.” – The Unicorn/ Amalthea It truly is a wonderful world where we can collective say that today, April 9th, is National Unicorn Day. These mythical creatures have floated around in our popular consciousness since  the time of the Ancient Greeks and have continued to stay in our culture. Remember this?

It was delicious. So, in honor of these honored creatures that have both shaped and been shaped by our shared culture, let’s look at the 5 unicorns that been galloped pop culture.

Let’s start with a recent book. Published February 14th, 2017, we have Not Quite a Narwhal. It might not seem much, but this little picture book was nominated for Goodreads Choice Awards Best Picture Books, stunning both children and parents alike with its beautiful artwork…

…and its themes of finding who you are and where you belong.
Congrats to Jessie Sima! Clearly a talent author and illustrator, she has a lot to be proud of.

4. The Lion, the Witch and the Wardrobe. 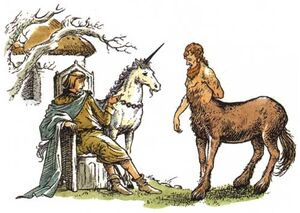 Image Via The Chronicles of Narnia WIki

Let’s get serious now. A war is raging. The Evil White Witch is leading an attack against Aslan and, for the sake of all of Narnia, Aslan needs all the help he can get. Of course Unicorns join this great battle in The Lion, the Witch and the Wardrobe.

But when Aslan needs everything to join him in the terrifying climax in The Last Battle against the devil God Tash, and with everyone from Eustace Scrubb to Lucy Pevensie, of course the unicorns are back.

“Dear King,” said the Unicorn, “I could almost wish you had, so that I might forgive it. Farewell. We have known great joys together. If Aslan gave me my choice I would choose no other life than the life I have had and no other death than the one we go to.”

Unicorns are an inspiration to us all.

3. You Don’t Want a Unicorn

This book is no joke. In fact, it might save your life. Released on, February 14th, 2017 the information this book provides is so valuable that I can’t believe we’ve survived as a species this long without this crucial knowledge.

I’ve dilly-dallied enough. Ame Dyckman teams up with illustrator Liz Climo to create this laugh-out-loud hilarious book, You Don’t Want a Unicorn. It’s a cautionary tale taken to the extreme, asking us the hard hitting questions like: Are unicorns magical delight incarnate or are they a mythological menace?

With images of a unicorn getting its horn stuck in a ceiling after a gentle hop to cupcakes you can’t eat all over the house (don’t ask where they come from), you’ll laugh until you have tears down your face. You might not think about this book right after you put it down, but, like a boomerang, it will come back…

2. Harry Potter and the Sorcerer’s Stone

Although a unicorn never shows up to properly stab Voldemort in his snake-like face, they do encounter each other. Unfortunately it’s in Harry Potter and the Sorcerer’s Stone and Voldemort is on the back of Professor Quirrell. And he’s eating unicorn blood to sustain himself.

Thanks JK. Why couldn’t a unicorn get revenge on Voldmort by stabbing him? Or at least at one point in the book the unicorn could have gotten in a quarrel in Professor Quirrell.

First published on March 25th, 1968, the book is about a unicorn named Lady Amalthea who realizes she is the last her kind. Setting out to find her compatriots, Lady Amalthea. Along the way she picks up the sorcerer Schmendrick and the bitter but hopeful Molly Grue.

This may seem to be a lighthearted journey, and in many ways it is — after all, it is a young adult child’s book — but within the pages are universal themes that reach beyond the words themselves. The book talks about death, fate, what when to fight and when not to fight, and what doing what needs to be done even if you don’t want to.

The novel deals with very adult themes, showing that unicorns can be used to express anything from purity to love to grief and heartache — in fact, unicorns can cover that cover the whole human spectrum of emotions, and that’s amazing considering they are usually just white horses with a horn on their head.