Casting news for The Batman continues to roll in. Recently, it was announced that Zoe Kravitz will play Selina Kyle/Catwoman, almost at the same time as Jonah Hill declined the role of Oswald Cobblepot/Penguin. Following his departure, the announcement of another Batman villain coming to the film was just made.

Paul Dano, the acclaimed actor who just recently starred in the critically acclaimed miniseries Escape at Dannemora, has been cast as The Riddler, one of Batman’s most notorious villains who incorporates riddles and puzzles into his various crimes. 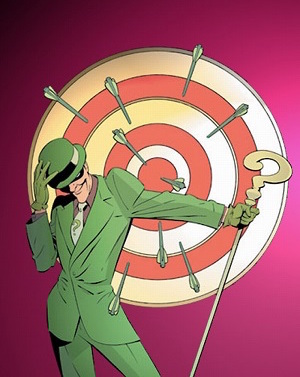 This will be the second time that The Riddler will be portrayed in a film, after several appearances in television shows and video games. The character was originally portrayed by Jim Carrey in Batman Forever as Edward Nygma. However, according to The Hollywood Reporter, Dano will be portraying a different character named Edward Nashton.

Not much is known about The Batman, but it is rumored to be a re-imagining of the Caped Crusader, a stark departure from Ben Affleck’s portrayal in Justice League.

Batman’s next cinematic adventure, simply titled The Batman, has been slowly filling out it’s cast. Robert Pattinson (Twilight) will play Bruce Wayne/Batman, Jeffery Wright (The Hunger Games) will play Alfred, and Jonah Hill (The Wolf of Wall Street) will play Oswald Cobblepot/Penguin. Now, another classic Batman character has been cast.

The character of Catwoman has had several live-action adaptations over the years. This includes Julie Newmar in the 1960s Batman television series, Michelle Pfeiffer’s portrayal in Batman Returns, Halle Berry’s ill-received standalone film Catwoman, and Anne Hathaway’s version in The Dark Knight Rises. This is also the second time Kravitz will play the character, as she voiced Kyle in The Lego Batman Movie. Kravitz will be joining her stepfather, Jason Momoa, in the DCEU, as Momoa is currently playing Aquaman.

Kravitz has starred in a number of big screen adaptations such as X-Men: First Class, The Divergent Trilogy, and Harry Potter spin-off Fantastic Beasts: The Crimes of Grindelwald. She most recently reprised her role as Bonnie Carlson in the second season of Big Little Lies. 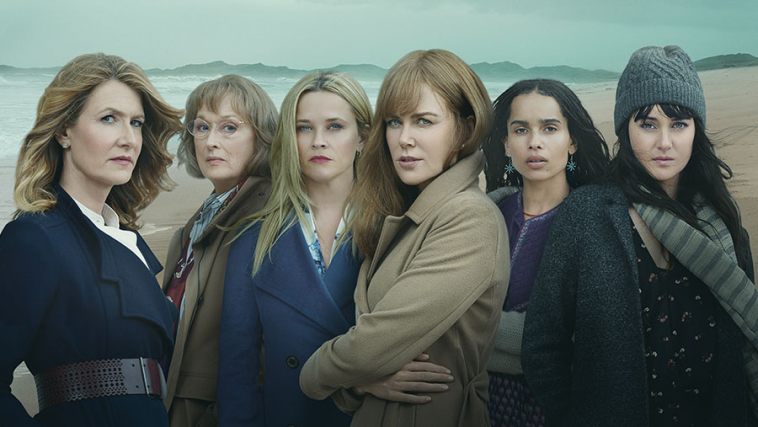 Production on The Batman is scheduled to begin this summer, with a planned release in 2021. 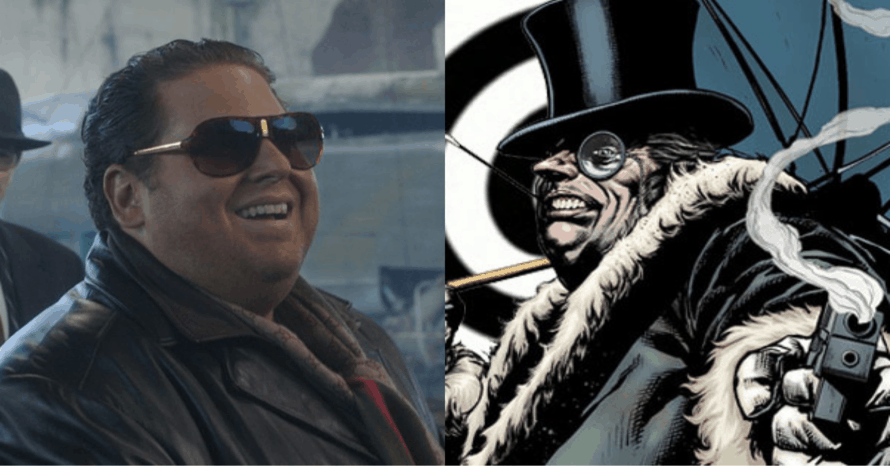 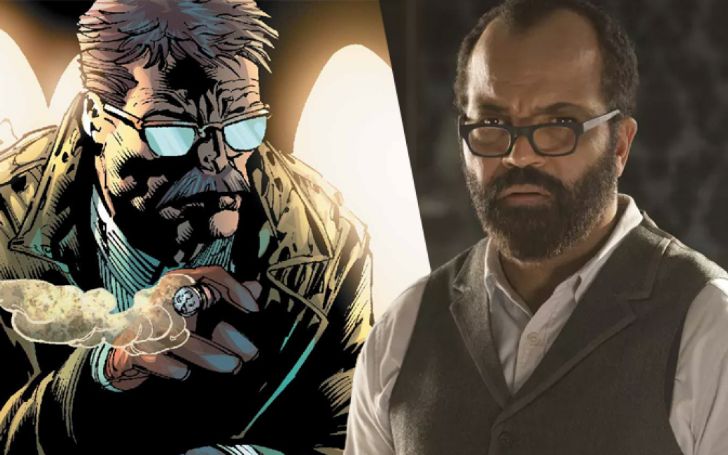 There’s a good chance that Andy Serkis and director Matt Reeves will be teaming up for the screen once again, but without all of the CGI motion-capture gear.

ComicBook.com reports that Serkis is rumored to play one of the many villains included in The Batman opposite Robert Pattinson. His role is unknown, but fans have pushed for him to be cast as the Penguin since the film was announced. The chances are even more likely now, given that the film will be inspired by Batman: The Long Halloween, which includes the iconic villain. Serkis and Reeves have a successful working relationship after the Planet of the Apes franchise, and Serkis has expressed excitement for any opportunity to collaborate again:

Oh, for sure! I mean, I’d go to the edge of the created universe with Matt Reeves. I mean, he’s the most brilliant director. I would work with anything with him again, y’know, I mean, I absolutely adore him and we’re very good friends, close friends, and I think he’s an extraordinary director so, for sure.

Serkis’s other recent big-franchise commitments have also concluded. His Caesar in the Planet of the Apes trilogy is dead. His Ulysses Klaue in Black Panther is dead. His Supreme Leader Snoke in Star Wars is dead. There’s no reason why he shouldn’t be given a coveted Batman role.

After hearing the news that the standalone #batman movie may have The Penguin as the main villain and also hearing that @andyserkis would like to do a #dc role, I thought he would be a dope cast that would bring in his unique take on the character @mattreevesLA #TheBatman pic.twitter.com/Uoiv69MoqZ

Given that starring as the Penguin is somewhat consistent with his experience playing CGI animal characters, would a CGI eyebrow and monocle be out of the question?

Like all recently vacated roles, rumor has been circulating the role of Gotham’s Dark Knight. As Batfleck settles into the past, a coveted opportunity opens up for a wide variety of hungry actors. Everyone from Jon Hamm (Yes) and Armie Hammer to Jon Snow (No) and Edward Cullen (Maybe, who knows?) have been linked to the cape and scowl in previous weeks. However, all these rumors have been confirmed as malarkey.

VIDEO: Armie Hammer on #Batman rumors: "No one who can actually give me the job has asked" https://t.co/UpJgJ9dIUp

Most of the time the list of rumors we find on the internet aren’t even as ridiculous as they should be; they’re often pretty possible. However, here are some Batman casting rumors (some spiced with only a hint of believability and others more so) I hope to hear in the time leading up to Matt Reeves’ The Batman… 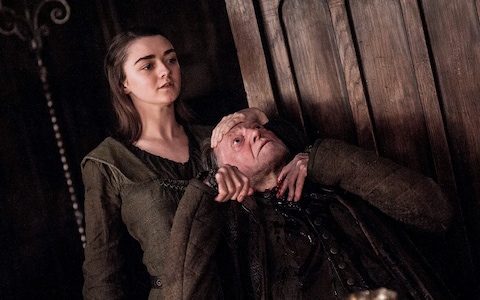 Batman could be described as a faceless man. More of a symbol than a man, Bruce Wayne runs around Gotham City giving people hope; the line from 2005’s Batman Begins goes “as flesh and blood I can be ignored, I can be destroyed but as a symbol, as a symbol, I can be incorruptible, I can be everlasting.” Well, I’ll be dipped in an existential crisis that makes me turn to a life of secluded vigilantism if this philosophy doesn’t align with that of The Faceless Men based in Bravos from Game Of Thrones.

This guild of assassins specializes in the relinquishment of identity and possess the ability to shapeshift and change faces. As we all know, everyone’s (living) favorite Stark is taken in by the guild and trained to be a faceless man. Not only do Arya’s combat abilities make her an obvious bat-person choice but her supernatural abilities would be a gamechanger. Also, Arya’s upbringing is eerily like that of Bruce Wayne’s…

In Westeros, The Faceless Men are well renowned shapeshifting assassins. In the real world, Meryl Streep is a well renowned shapeshifting assassin—in that she kills it. Arguably the greatest actor EVER, Streep’s transformative nature is unparalleled. Twenty-one Oscar nominations and counting. We owe it to ourselves, nigh the world to appoint such an icon as the face of the DC universe. #MerylStreep2020. The Mirror actually did an article about this back in 2016, referencing Meryl Streep’s reaction to that rumor at the time. 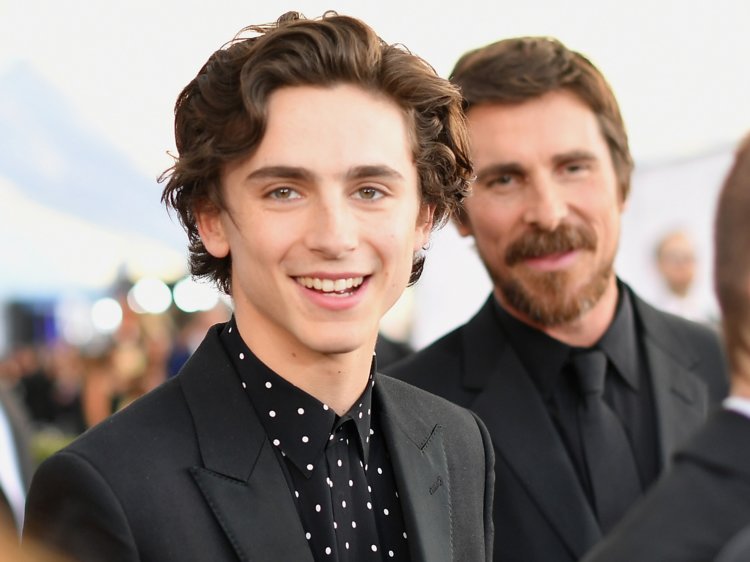 Okay, so I’ve joked about this before, but for real; if one were to assign this kid the task of fighting crime in Gotham, he would demolish expectations. I’m sure Timothée would stock up on the whey protein, chicken and chocolate milk whilst doing pushups all day long. This would move him from Indie life into the realm of overwhelming celebrity. Not only does Timothée Chalamet have the acting chops (having already been nominated for an Academy Award) but he fits the bill regarding DC’s idea of a younger Batman in Reeves upcoming film. He could literally be the studio’s Batman for the next thirty years.

When this man acts, we call him Donald Glover and when he raps, we call him Childish Gambino; we do this without questioning it or ever really talking about it. Basically, Donald Glover already inhabits two entirely separate personas so well that some people don’t even realize the two are one and the same. That’s Batman/Bruce Wayne AF. In addition to this display of dual life swagger, Donald Glover was an amazing Lando Calrissian in Solo: A Star Wars Story (or, at least, I thought so).

Bruce Wayne needs to be handsome and charming. False. Batman needs to be strong and intimidating. False. Pete Holmes proved these falsehoods when he took it upon himself to don the cape himself in a series of web parodies. These skits recreated scenes from Christopher Nolan’s Batman films—the comedic twist was often that Batman is either incompetent or sex-obsessed. If the studio really wanted to bring something new and fresh to the table… 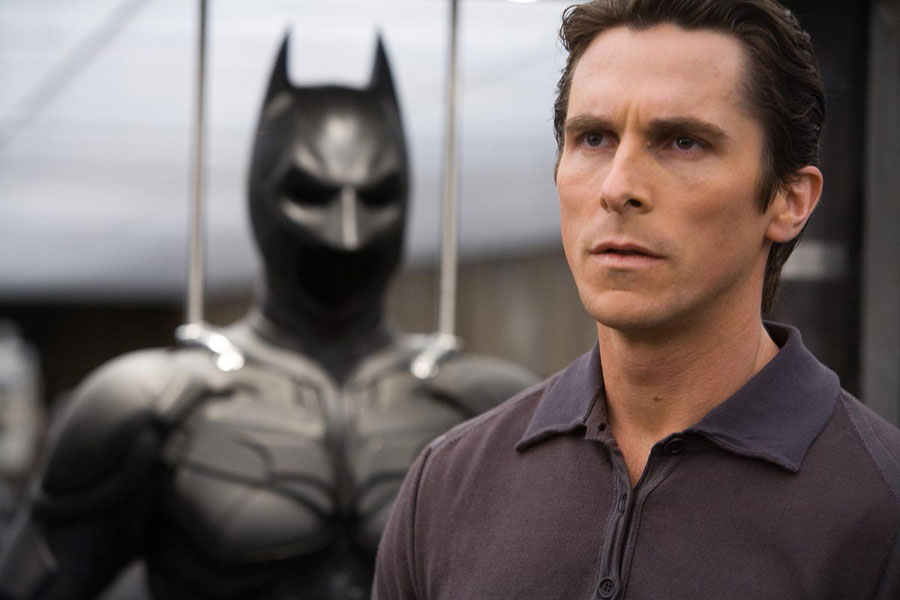 The hero Gotham deserves, but not the one it needs right now. He’s a silent guardian, a watchful protector, a Dark Knight. 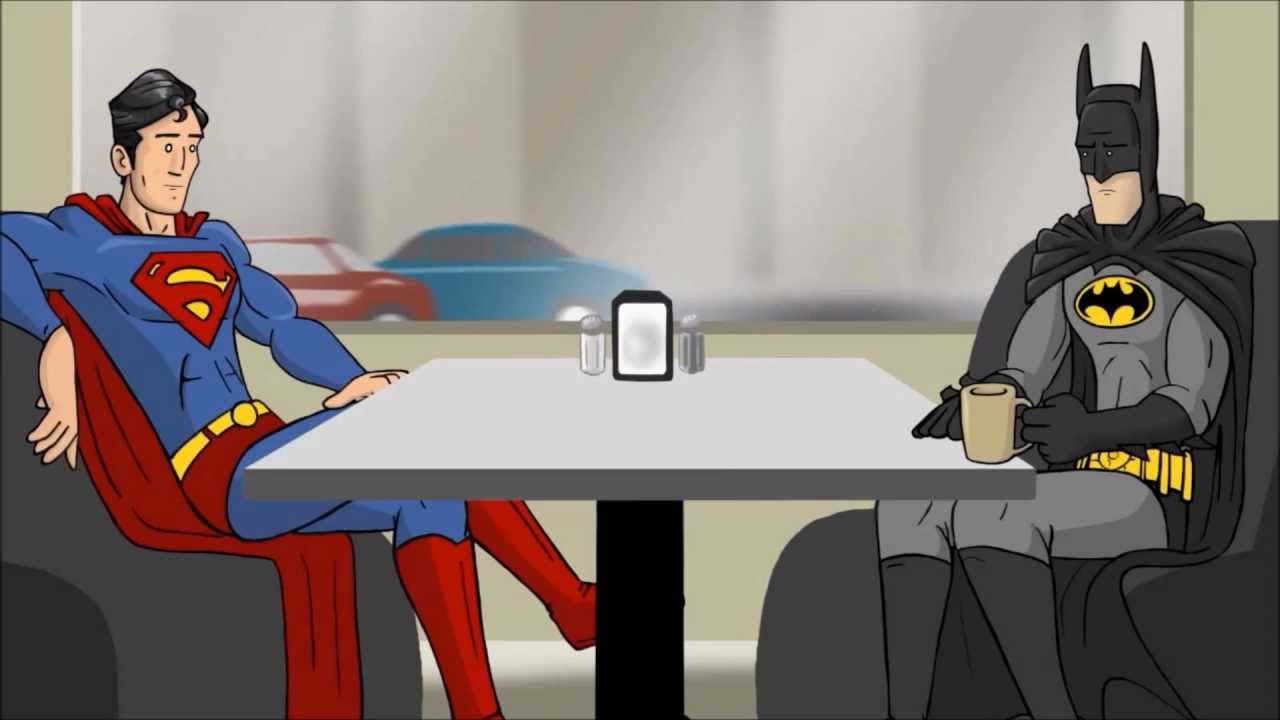 How It Should Have Ended or HISHE is an animated web series that parodies films through changing their endings and pointing out their flaws. An ongoing theme of their superhero related videos is the interjection of Batman and Superman having coffee Seinfeld-style. They discuss everything from the Marvel vs. DC rivalry to Batman’s impervious nature. Superman will ask Batman “How?” to which Batman always replies, “Because I’m Batman!” Below is a clip where the brilliant people over at HISHE parody that scene from the 1996 Jon Favreau film Swingers.

Just because I’m a BIG fan.  Ten times fiercer than Batman and twenty times more charming than Bruce Wayne. I’ll probably include Ms. Stone on every list I write until the end of time. Henceforth, she shall be my reoccurring motif. But really, odd numbers in lists just get more clicks according to “experts.” She could definitely do it though; many internet fanatics have imagined this national treasure as Batgirl already: 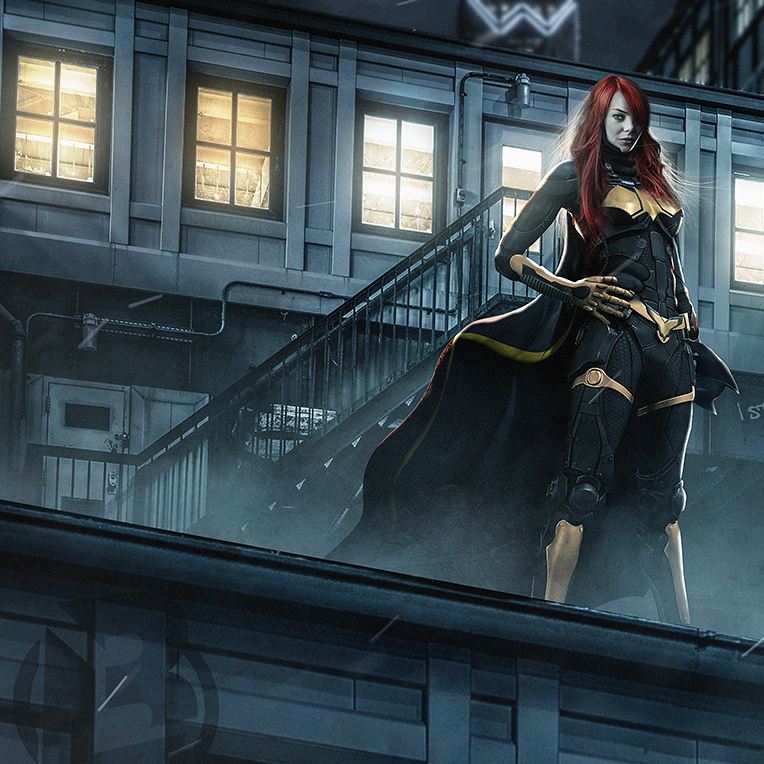 Oscar Isaac can pretty much do anything. He has already played a mysterious CEO in Ex Machina (although a very sinister one) and rocked the gunslinger mentality in the Star Wars Trilogy. He’s been attached to the role via the internet in the past for a while and fans seem to love it. My only request would be that of a melancholy musical number because Oscar Isaac is a god damn songbird…

Who do you think should play batman in the upcoming movie?
Retweet for Ron Swanson
Shut your mouth for Ben Affleck pic.twitter.com/B7wRS75Gag 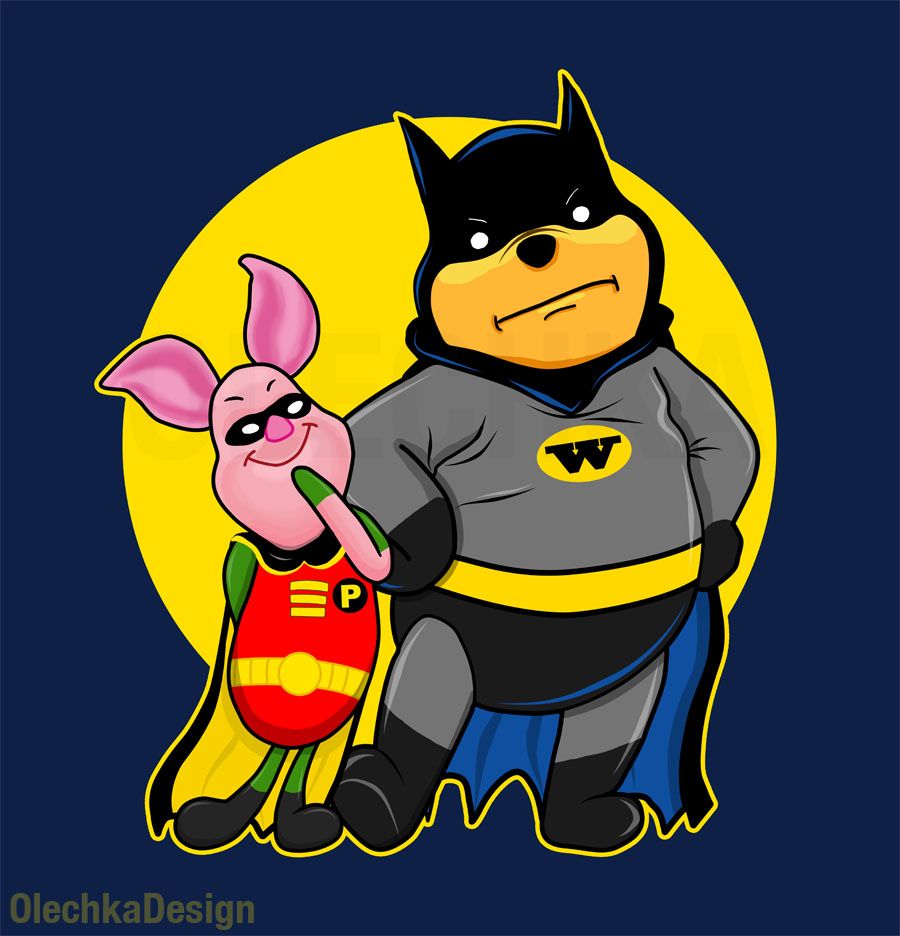