Strand on the Upper West Side is open for business!  The doors opened this week for book lovers to come and enjoy the location. With a mask on of course. The new location used to be home to Book Culture, until it closed back in February. The store started to face hardships back in June 2019 due to financial issues. The owner, Chris Doeblin, did his best to raise money to keep the store open, but in the end his attempts backfired when he was sued by his business partner Rick MacArthur for misleading customers. So, the store had no choice but to close it’s doors. On the bright side, the store has other locations, and Doeblin will be looking for another one. Now this former Book Culture location has become Strand at Columbus Ave. it was supposed to open in March, but due to the pandemic the grand opening had to be postponed until now. Similar to the original and beloved location at Union Square, it will continue to sell used, rare, and new books. Along with bookish items like their totes, pencil cases, journals, and they will be expanding their events. Children story time will take place at this location and author talks as well.
This store is a bright light for book lovers in the city. With the current state of the world, we all need a little something to make us smile and have hope and this new Strand is doing just that.
Be sure to check it out! It’s located at 450 Columbus Ave.

The world has been rocked by the coronavirus, and people are being forced to stay indoors to prevent the spread. Businesses have been forced to shut down, and Amazon has put priority items on top of their delivery lists. Books have taken a back seat on Amazon until the end of April, and The Strand and Barnes and Noble along with hundreds of other bookstores across the country have closed until further notice, but what does that mean for book publishers? Right now the e-book and digital audiobook companies are doing well in keeping readers reading. However, some brick and mortar stores are trying to switch to online, due to only a handful of book distributors remaining open for now. Unfortunately, the online orders are barely scratching the surface of what bookstores do on a typical day. So, if the remaining distributors are shut down, then the bookstores that are running strictly on online orders are going to be in trouble. The Strand had to lay off 188 workers, though they hope they can rehire them once they reopen.

As for the publishing houses, it’s hard for them to promote and produce new books when author tours are being canceled and book printings are on hold. Layoffs could be coming next, and then what? The Big Five; Simon and Schuster, Penguin Random House, Hachette Book Group, HarperCollins, and Macmillian already backed out of BookExpo and Bookcon. The event has been pushed back to the end of July, but right now their main publishers are not attending. So many books that were in the works are now put on hold, and nobody really knows what will happen when this over.

One thing we can count on is authors having plenty of time to write, so by the time this pandemic comes to a close, there will not be enough literary agents for all the manuscripts that will be overflowing their desks and emails. So, if you’re a writer you should be writing as much as you can right now! Work on your craft and continue to buy books from distributors for as long as they’re open.

Featured Image via The Writing Cooperative

Enjoying Bookstr? Get more by joining our email list!
Bookstr is community supported. If you enjoy Bookstr’s articles, quizzes, graphics, and videos, please join our Patreon to support our writers and creators or donate to our Paypal and help Bookstr to keep supporting the book-loving community.
Become a Patron!

In the midst of the pandemic, a lot of workers are unfortunately being laid off, and Strand Bookstore, unfortunately, is no exception. The store closed its doors last week, until further notice. Now, due to the closure, and the unknown of how long this pandemic will last, the store had to lay off about 188 of their workers. The lay off is hopefully temporary, and the workers did get paid last week, but considering the store is independent, and has no money coming in right now, the store had no choice. When things are back to normal, they are hopeful that they can hire everyone back, bur for now, they only have twenty-four remaining employees. They thought they would be able to keep their online shop open, but as of Sunday night, the Governor put that on pause, so nothing can be shipped out of the store.

Barnes and Noble closed it’s doors over the weekend as well, along with many other bookstores. Right now the only stores open are ones that carry essential needs, like grocery stores and pharmacies. Amazon isn’t shipping books until the end of April, so readers have no choice but to use ebooks for now. The libraries are closed as well, so this is a sad time for book lovers, without access to any paper books, but right now, the important thing is staying indoors and washing your hands. In order for things to go back to normal faster, we have to follow the rules and do what’s best for ourselves and the world. A big round of applause to the essential workers who go to work every day to ensure our safety. It is unfortunate that workers are being laid off, but this shall pass. Stay safe!

If you’re a New Yorker that loves books than you know what a landmark the Strand Bookstore is. The store opened in 1927 on a fourth avenue block, then called Book Row, which held forty-eight bookstores. The owner and creator, Ben Bass, was only twenty-five when he started the store. He wanted the store to be a place where book lovers and writers could come together, so he named the store after the street in London where writers such like Dickens went to gather. It was in Greenwich Village and at first it was place for writers to sell their books, and then in 1957 it moved to it’s current location on 12th Street and Broadway. 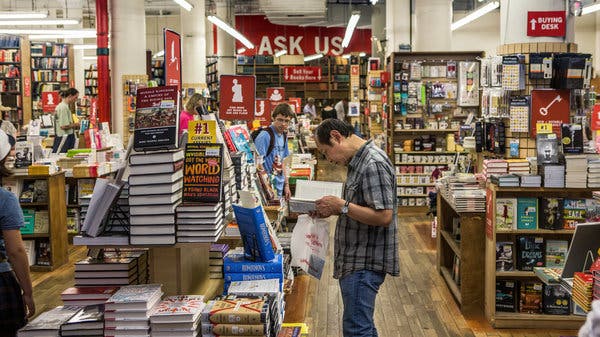 Now Strand also sells merchandise such as journals, socks, pens, bags, shirts, etc. Of course they also sell books, new, used, and old, or in other words, classics. The other Strand locations are the kiosks in Time Square and in Central Park. However, next month Strand will be expanding to the Upper West Side, Columbus Ave between 81st and 82nd street.

The store that used to be in that location was Book Culture, but due to a dispute between John MacArthur, who is the president of Harper Magazine, and Chris Doeblin, who is the primary owner of the New York Times, the store closed, and now Strand will occupy the location. The store will be called the Strand on Columbus Avenue, and of course book loving New Yorkers are excited to see this new location. Out of the forty-eight bookstores that were on book row, Strand is the only one that still stands. Strand is here to stay.