We asked horror legend Heather Graham if we could pick her brain, and what we found was just a thrilling as her novels.

END_OF_DOCUMENT_TOKEN_TO_BE_REPLACED

Though we might not readily associate ghost stories with Christmas Eve and winter celebrations, it was actually a very common practice to tell scary tales during the 19th century and even earlier on than that. For a number of reasons, some of which can be cited back to Puritan ancestry, this story telling tradition fell out of practice in America.

I, however, am a horror story buff, and I will look for any excuse to spin a scary yarn with friends and family.

Here are five ghost stories to read on Christmas Eve. This is most definitely the longest ghost story on the list, but it definitely fits with the season. Charles Dicken’s A Christmas Carol is a culturally significant tale that has countless adaptations credited to it. This narrative follows Ebenezer Scrooge, an embittered old man who doesn’t just hate Christmas, but he just hates people in general. Yet out of everyone, he despises individuals who would dare to ask him for his time or, even worse, his money. He intends to spend Christmas Eve alone, as he does every year, but his plans are uprooted when the ghost of his former business partner comes to him and says that three more phantoms will be visiting him that night. Scrooge is forced to confront the ghosts of his past, and he is urged to change his ways. If he doesn’t, his actions won’t only result in ruining his life, it will also harm those directly impacted by his decisions.

2. The Turn of The screw Henry James‘s novella, The Turn of The Screw is an eerie tale that spans roughly seventy pages. The story begins with the narrator and his friends telling each other ghost stories one Christmas Eve, and the narrator claims that he is in possession of a one hundred percent real account of a haunting. What follows is the story of a governess who is hired to teach and care for two children. While her employment begins without incident, the governess soon begins to see strange, ghostly figures from a distance. She soon learns that these phantoms have sinister plans for the children, and she must do everything in her power to protect her two pupils. Written by Algernon Blackwood, The Kit Bag is a short story that follows Johnson, a lawyer’s secretary. Johnson is set to go on Christmas vacation after his boss wrapped up a case where he defended a man convicted of murder. He borrows a kit bag from his boss, but there is something very, very wrong with it. Johnson begins seeing images and hearing voices near the bag. This story is suspenseful and frightening, and it is definitely an excellent ghost story to read this winter. This one is most definitely a breath of fresh air after the last two stories on this list. Oscar Wilde‘s The Canterville Ghost is a comedic story that plays with the tropes found in English ghost stories. This narrative follows an American family who moves to England and takes up residence in a haunted house. Try as the ghost may to frighten these new tenets, his efforts are in vain—the family just isn’t scared of rattling chains and random bloodstains. Unlike the previous two entries on this list, this story also has a happy ending. *Spoiler Alert*: This story begins as a playful ribbing of English ghost stories and ends with redemption for the ghost. So many of the images for M.R. James‘s short story Oh, Whistle and I’ll Come to You, My Lad, are terrifying. This one is pretty tame by comparison to a few that I found. Professor Parkins, the story’s main character, goes on a golfing vacation. While on vacation, he comes across some old ruins and, and in these ruins, he finds a small whistle. Almost immediately after finding this item, Parkins begins to see a figure, have visions, and experience an oppressive energy. This all culminates in the final chilling encounter, where the figure that Parkins has been seeing in the distance appears in his bedroom.

The possibilities for horror are endless…even when you only have two sentences to terrify your readers. Lucky for you, here’s five more creepy and disturbing horror stories that only take a few sentences to read. 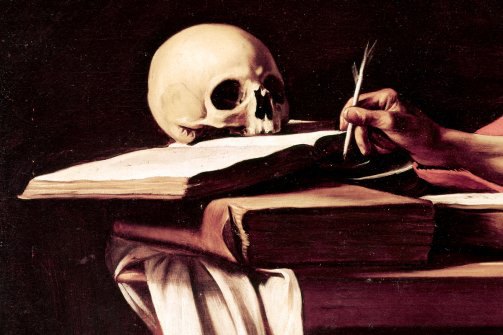 Image via the impact news

1. My wife woke me up last night to tell me there was an intruder in our house. She was murdered by an intruder two years ago. — The_D_String

3. After working a hard day I came home to see my girlfriend cradling our child. I didn’t know which was more frightening, seeing my dead girlfriend and stillborn child, or knowing that someone broke into my apartment to place them there. — cobaltcollapse

4. You hear your mom calling you into the kitchen. As you are heading down the stairs you hear a whisper from the closet saying “Don’t go down there honey, I heard it too.” — comparativelysane

5. I never go to sleep. But I keep waking up. — genetically_witless