Another book to screen adaption is coming to Netflix! Netflix recently ordered Maid: Hard Word, Low Pay and a Mother’s Will to Survive, a memoir written by Stephanie Land to series. The novel is described as a female driver dramedy. The writer behind the hit series Orange is the New Black and Shameless, Molly Smith Metzler will serve as writer for this series. She will also serve as executive producer and showrunner. Straight from John Wells Production, John Wells and Erin Jontow will be executive producers, along with with a few others, such as Robbie, Tom Ackerly and Brett Hedbloom.

The series will follow a single mother who becomes a housekeeper to try to make ends meet, as she tries to battle poverty. It will be told entirely through the point of view of the woman, and it is said to be an inspiring exploration of poverty in America.

According to Wells, Stephanie tells a remarkable human story of a young woman trying to secure a future for her and her infant daughter in the face of overwhelming odds and and governmental assistance programs. 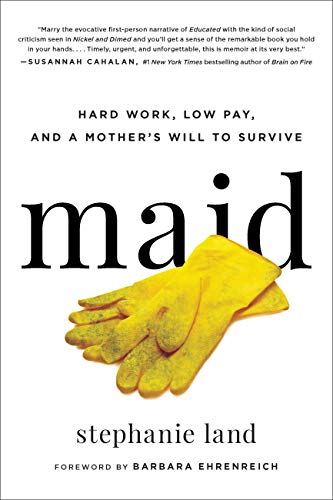 The novel came out in January of this year and debuted at number three on the New York Times Bestseller List.  Land, was inspired by a 2015 article she wrote for Vox. You can read the article here.

As one of the most popular shows on Netflix, Orange Is The New Black has garnered critical acclaim and high viewership for the streaming service. Based on the memoir of the same name, the series follows several inmates at a women’s federal prison in New York. Specifically, it follows the main character Piper Chapman as she adjusts to prison life after getting caught smuggling drug money.

After seven years of following Piper and her fellow inmates, the series is coming to an end.

Netflix released the official trailer for the final season of Orange Is The New Black. It shows Piper finally being released from prison and trying to adjust to life with a criminal record. Meanwhile, the other characters are still locked away and dealing with their own problems.

The month of June is coming to a close, and with that is the start of Summer! What better way to spend the sunny season than indoors, binge-watching Netflix.

We’ve broken everything down by genre and release date, so skim for your favorites or get lost in Netflix’s July offerings.

From Orange Is The New Black | Image via Giphy

2. Orange Is The New Black Season 7, originally based on the novel by Piper Kerman (coming July 26th)

1. The American, based off the novel A Very Private Gentleman, written by Martin Booth (coming July 1st)

2. The Son, based off the book by Philipp Meyer (coming July 26th)

From Inkheart | Image via Tumblr

1. Inkheart, based on the book by Cornelia Funke (coming July 1st)

1. Astro Boy, based on the manga by Osamu Tezuka (coming July 1st)

2. Kakegurui Season 2, based on the manga by Homura Kawamoto and Toru Naomura (coming July 4th)

3. Saint Seiya: Knights Of The Zodiac, based on the manga by Masami Kurumada (coming July 19th)

From The Princess And The Frog | Image via giphy

1. Charlie and the Chocolate Factory, based on Roald Dahl’s book of the same name (coming July 1st)

4. Disney’s The Princess And The Frog, based loosely on E. D. Baker’s The Frog Princess (coming July 16th)

5. The Epic Tales Of Captain Underpants Season 3, based on the Dav Pilkey Comic Series

Netflix has a lot to offer children this July. Perfect for the start of Summer vacation!

With all the Disney films joining the roster, parents, especially new ones, can join in the fun as well! Since you can bring Netflix with you anywhere, why not have it for the family vacation?