Stephen King fans are being spoiled this year! With Pet Semetery out in theaters and It: Chapter 2 fast approaching, another adaptation of the horror master’s work is also taking form. According to AV News, Apple is producing another King adaptation for its own Apple TV+ streaming service. The book adapted will be Lisey’s Story, psychological blend of horror and romance centered around a female protagonist: Lisey Landon. The book is about Lisey dealing with the death of her husband, a former author with a dark past and some magical powers. The adaptation will star Julianne Moore in the titular role as Lisey. J.J. Abrams and his studio, Bad Robot, will be helping to producce the series. Its unknown when the series will commence production but we hope to see it soon. Might even be worth subscribing to Apple TV+ for!

Are you excited about this adaptation? Let us know in the comments!

With a Metacritic score of 87 out of 100, based on fifty-three critics, indicating “universal acclaim” and a 98% on Rotten Tomatos with an average score of 8.24 out of 10, it’s hard to image Can You Ever Forgive Me as being anything different from what it is. However it was recently revealed that it was Julianne Moore, not Melissa McCarthy, who was originally lined up to play author and forger Lee Israel.

I see no resemblance, but that was half the issue. Let’s start at the beginning.

The New York Times wrote in Lee Israel’s obituary that she “was a reasonably successful author in the 1970s and ‘80s, writing biographies of the actress Tallulah Bankhead, the journalist Dorothy Kilgallen and the cosmetics magnate Estëe Lauder. But in the early 1990s, with her career at a standstill, she became a literary forger…”

An author turned bad, oh my! Never seen one of those. 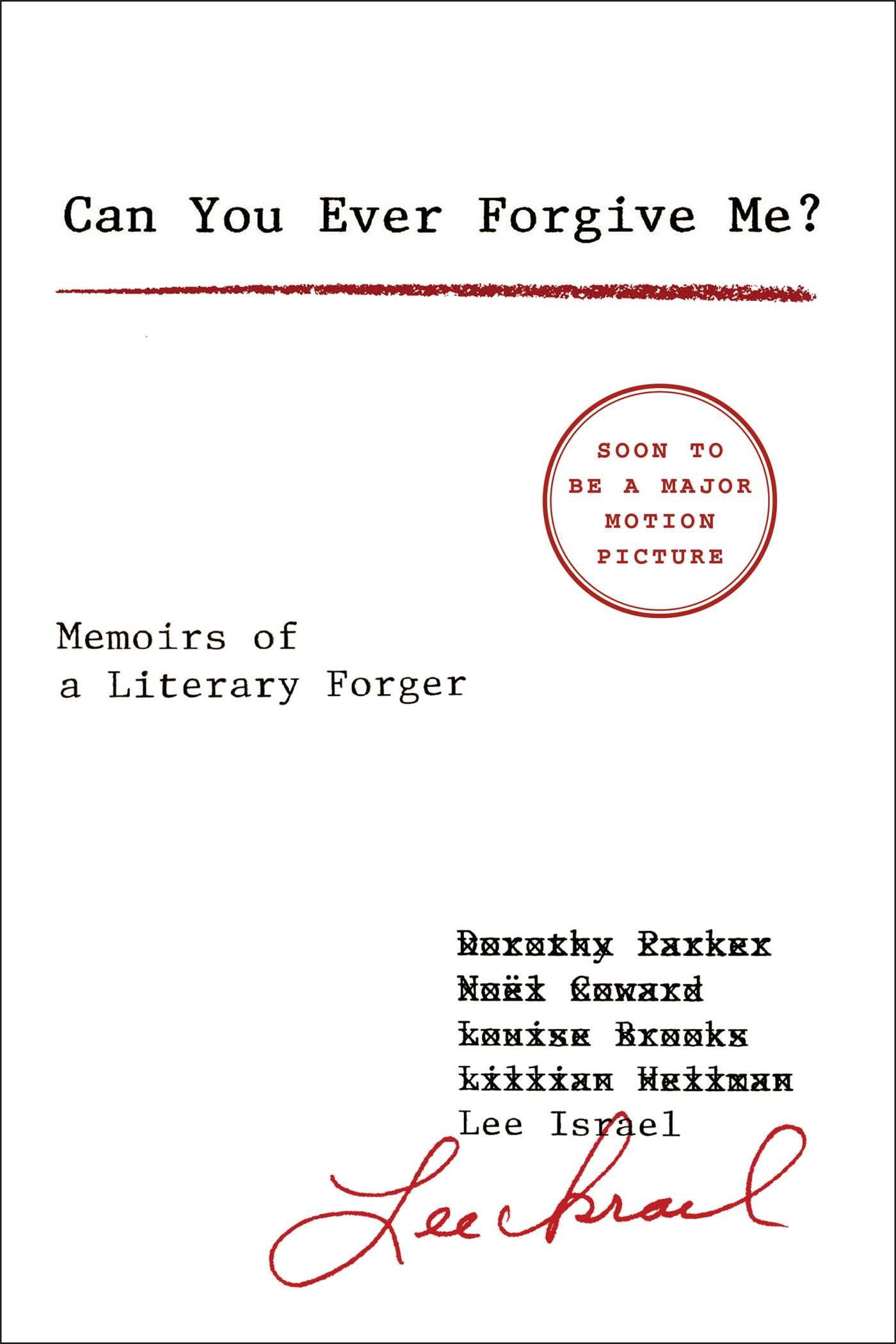 Struggling with financial troubles, writer’s block, and alcoholism, Lee Israel realized that she could sell personal letters and autographs from famous authors for money. So  in addition to forging many letters, also stole letters from archives and selling them, replacing the ones in the archives with fake ones.

No one is exactly sure how the FBI got hot on her trail (except, maybe, the FBI) but her memoir, Can You Ever Forgive Me?: Memoirs of a Literary Forger, indicates that after a Noël Coward expert insisted that Coward would not have referenced his sexuality so enthusiastically as he allegedly did in a letter provided by Israel, suspicion was aroused, putting an abrupt end to Israel’s scheme.

Knowing all that, it should be no surprise that her memoir was highly controversial when it came out. Book Reporter responded in a review for the memoir that the book is “a hilarious memoir of a self-described miscreant and her pursuit of a meal ticket. Ironically, in a joke the reader will share, by purchasing her book we all participate in buying her that meal.”

Well, at least they called the book ‘hilarious’. On that note the New York Times quoted Naomi Hample, a New York City bookstore owner who had purchased some of Israel’s forged letters in 1992 when she said, “I’m certainly not angry anymore, though it was an expensive and very large learning experience for me. And she’s really an excellent writer. She made the letters terrific.”

So Lee Israel is a touchy subject to say the least. Well, it made a pretty good movie.

Now it’s 2011, three years after the 2008 memoir hit shelves, and Variety breaks the news with this sentences: “Recent Oscar winner Julianne Moore is in negotiations to star in Nicole Holofcener’s Can You Ever Forgive Me for Fox Searchlight”. Come 2015, Variety reported that Julianne Moore had “exited [the production] due to creative differences”.

What happened? Here comes the Vulture!

Not that Vulture. This Vulture….

Vulture report that “Julianne Moore wanted to wear a fat suit and a false nose to play Lee Israel”.

So, take a look at the comparison between Israel and Moore pictured above… Julianne Moore wanted to fix that, and the Hollywood Reporter reported that Holofcener “is said to have felt that a fake nose would be too distracting,” which led to the Oscar Winner being fired. Moore told Watch What Happens Live! “I think that her idea of where the character was was different from my idea of where the character was, and so she fired me.” Despite the film garnering numerous nominations and a win at the Oscars, Moore has not seen it, saying it remains ‘a sort of painful experience.’

Featured Image Via Out

In 2001, Ann Patchett’s fourth novel Bel Canto amazed readers all around the world. It’s a book about music, love, and politics, set in a South America.The story begins at a birthday party thrown at the vice presidential home in honor of Katsumi Hosokawa, a visiting chairman of a large Japanese company and an opera enthusiast. A famous American soprano Roxane Coss is also invited to perform as the highlight of the night. However, the opera-embroidered night is broken by a break-in by terrorists who take the entire party hostage.

Ann Patchett and the cover of Bel Canto | Image via ProProfs

The appealing plot and Patchett’s skill at describing music make the novel successful. It was awarded both the Orange Prize for Fiction and PEN/Faulkner Award for Fiction. It was placed on several top book lists, including Amazon’s Best Books of the Year (2001). It was also adapted into an opera in 2015.

The trailer moves me with the last scene when Roxanne (Julianne Moore) steps onto the balcony and is ready to sing to the public. I think that will be a powerful moment in which music serves as a language of love and forgiveness.

Marissa Martinelli in her article at Slate commented that:

Patchett’s novel is beloved, but it seems like Weitz won’t be precious about making changes, since even in the relatively short space of the trailer, there’s already one major deviation from the original story. Around 40 seconds in, one of the young terrorists seems to shoot a man, presumably the opera singer’s accompanist, in the chest as he comes in the door; in the novel, the character simply dies from lack of insulin, having failed to disclose that he was a diabetic.

That may seem like a minor detail, but it’s significant, because the accompanist’s death is a major turning point in the story, and if the change is as it appears, then Weitz has turned a tragicomic moment into a purely tragic one. Whether that’s a sign of major tonal changes to the story as a whole or a simple tweak to the plot remains to be seen.

I’m sure this will a fantastic film adaption. See you in the movie theatre on September 14th!