Greta Gerwig’s adaption of Louisa May Alcott’s Little Women hit screens everywhere in December of last year. Three weeks on, it seems the film is headed for total success. With wide acclaim and a Rotten Tomatoes score of 95%, it’s unsurprising that The Academy has been paying attention, and it’s clear they LOVE it, nominating Little Women for six Oscars, including best picture and best actress. This comes as a welcome result considering the movie’s lack of appearance in the Golden Globe‘s best picture category. Sadly, unlike 2018, Greta Gerwig was not among the list of best directors, a list that was problematically entirely male. This highlights a bigger problem in Hollywood’s reportedly sexist culture. Greta Gerwig scripted an incredible adaption of a classic book, pulled together her powerhouse of a cast and kept Alcott’s core messages throughout. Some would argue that she deserves an award for bringing Saoirse Ronan and Timothée Chalamet together on screen again alone – but that might just be me. Despite all of this, she was snubbed when the nominations were released earlier this week. If Greta Gerwig couldn’t make the cut, it begs the question of what criteria is being considered. When Louisa May Alcott penned Little Women, the rebellious and enduring nature of the March sisters is part of what made the novel so brilliant and Greta Gerwig is no stranger to rebellion nor endurance, creating and existing as she does in a male-dominated film environment. It’s not all doom and patriarchal gloom, though. In speaking to Vanity Fair, the producer of the film, Amy Pascal, pointed out that Little Women was the “third movie in the history of the Academy that has been nominated [for best picture] that has been written, directed, and produced by women.” That, in and of itself, is proof that Hollywood’s problems (much like our own) may lessen with age.

One of the core messages in Little Women, particularly in the movie, is the importance of writing, reading, and learning (oh my!). Spoilers are incoming for those of you fortunate enough not to know this!! When Beth gets sick, her illness is something that Jo hopes to aid with fresh sea air and a good story. Tragically, the plot alone is not enough to save Beth but the stories Jo writes for her are a comfort in her time of need. I think we can all agree that the comfort of a favorite story is no small thing and with Little Women being that favorite for so many people, the novel and film are self-fulfilling. Gerwig credits Little Women for giving her the inspiration to write and create, the film a passion project that no Oscar could ever overshadow. Despite the gender politics, the movie looks set to surpass box office records and hopefully take home some, if not all, its prospective awards at the Oscars. Gerwig may not have a directorial nomination to celebrate, but the film has the best picture prospects alongside potential accolades for Saoirse Ronan and Florence Pugh.

The latest adaptation of Little Women is fast approaching, and with it comes some brand new posters for the film.

Columbia Pictures released the seven character posters for the main characters of the movie. Based on the novel by Louisa May Alcott and directed by Greta Gerwig, the film stars Saoirse Ronan (Brooklyn), Emma Watson (Harry Potter), Florence Pugh (Midsommar) and Eliza Scanlen (Sharp Objects) as the March sisters as the March sisters and their paths from childhood to womanhood. The film also stars Timothee Chalamet (Call Me By Your Name) as love interest Lauire, Laura Dern (Big Little Lies) as matriarch Marmee, and Meryl Streep (The Laundromat) as Aunt March:

A theatrical poster was also revealed: 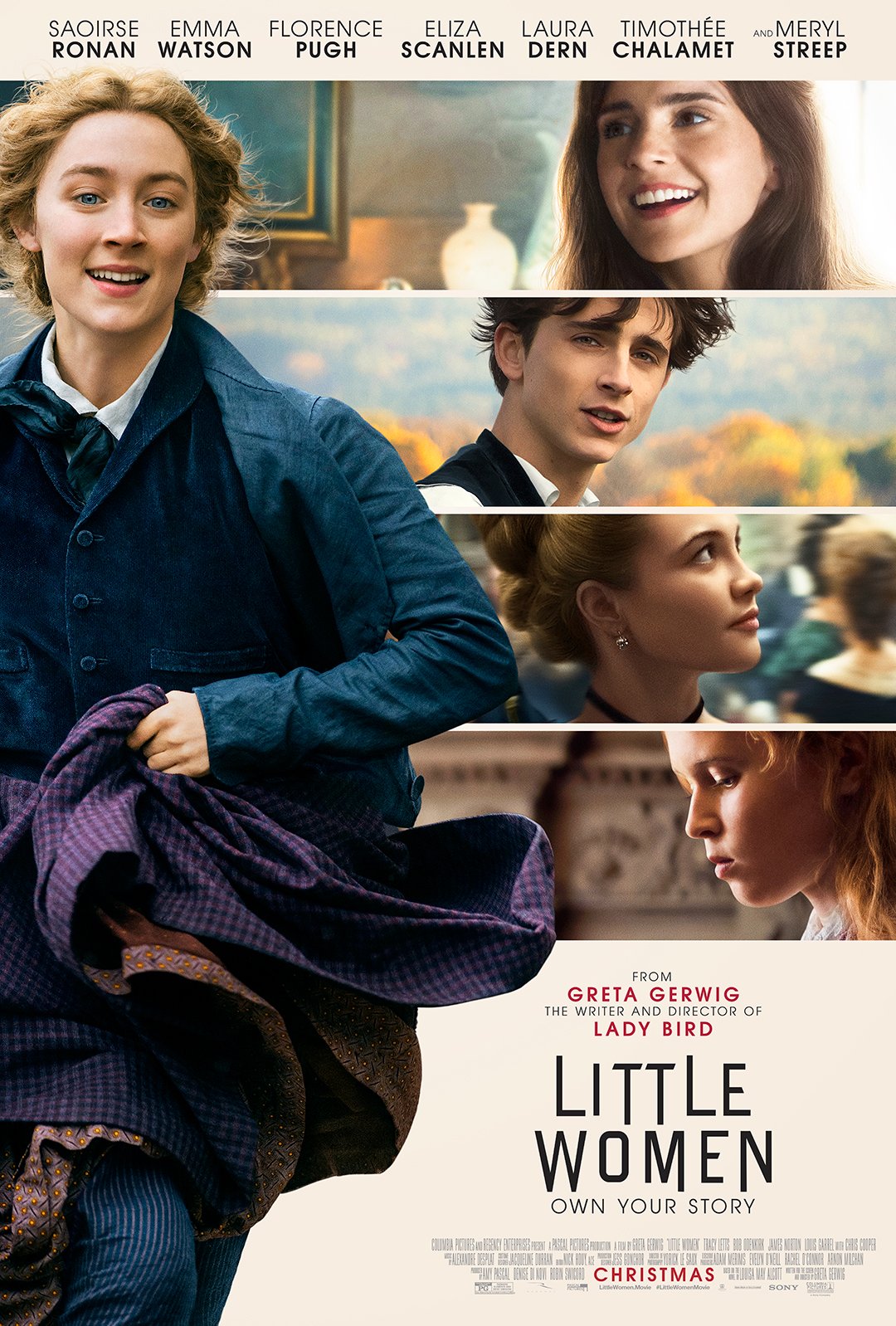 Little Women comes out this Christmas.

Another adaptation of Louisa May Alcott’s Little Women is set for release this Christmas. Directed by Greta Gerwig, it stars Emma Watson, Saoirse Ronan, Florence Pugh, and Eliza Scanlen as the March sisters. 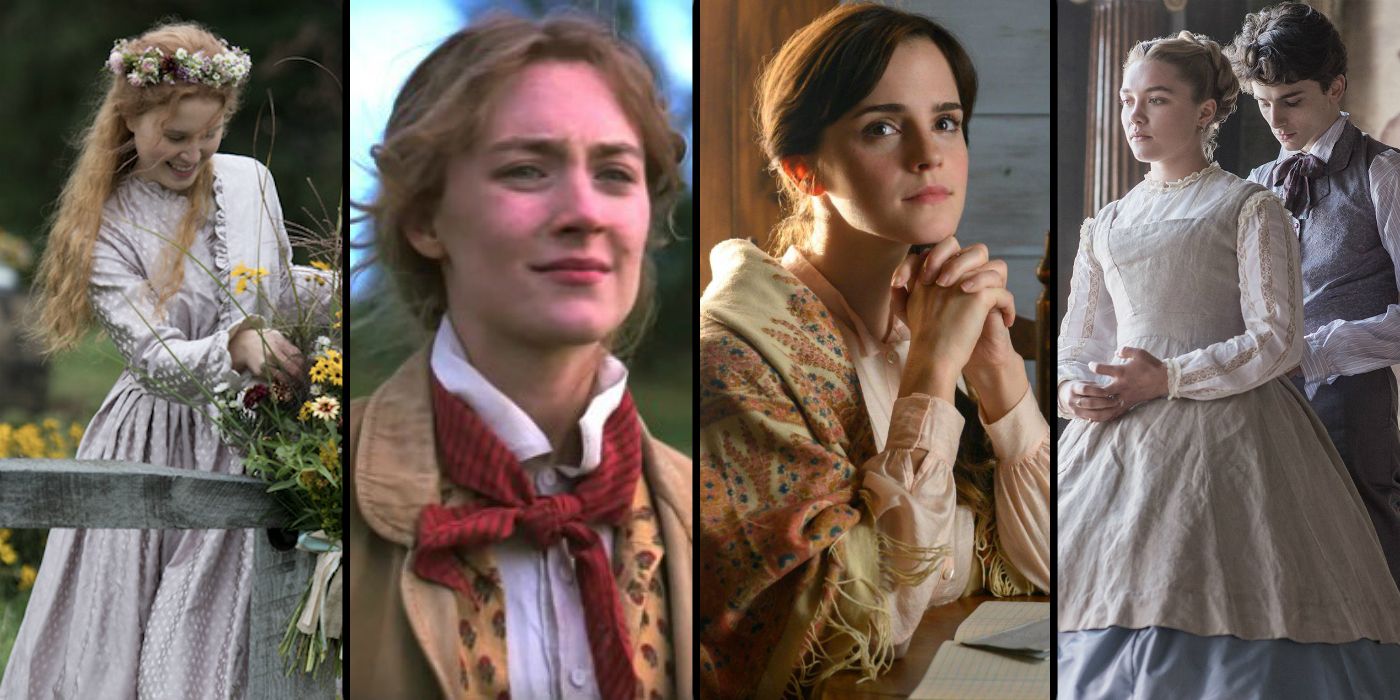 We’re still a long time away from release, but if early Twitter reactions are any indication, we might have a winner on our hands.

An early screening of the film took place in Los Angeles, and critics took to Twitter to share praise for the film. Many praised Gerwig’s direction and handling of the source:

#LittleWomen: Gerwig makes this material her own in delightful ways you’d expect and some adult-meditation-on-childhood ways I didn’t. So rewarding to see the ease with which she paints on this canvas and that she (or any director these days) was given it.

Greta Gerwig’s @LittleWomen is wonderful. A loving, meticulously-crafted adaptation that exceeded my expectations. Heartfelt, moving and a terrific showcase for its extremely talented cast and beloved source material. pic.twitter.com/NwcMmnx9Pg

Jo’s lines in #LittleWomen resonate w me completely differently now as a 33 yr old single writer. Wanting to remain independent but wanting to be loved. Greta’s take on the story made me connect w Jo in a way I never had. As a girl, I just thought she was crazy to reject Laurie.

Others praised the acting, particularly for Pugh, Ronan, and Meryl Streep, who plays Aunt March:

Greta Gerwig’s “Little Women” is an intelligent, honorable piece of filmmaking that pays great respect to a beloved literary tale.

Florence Pugh is outstanding, and doesn’t just steal, but snatch every viewer’s eyes in each scene she inhabits. #LittleWomenMovie #FilmTwitter pic.twitter.com/YAUw9iLDZ4

Oh hey, the #LittleWomen embargo has lifted. I love it more than rainbows. It’s faithful but not fawning, fierce and funny. Ronan and Chalamet are spot on and Pugh is so good I almost forgive Amy after all these years (I MEAN SHE BURNT THE BOOK! AND STOLE THE TRIP TO EUROPE!).

Great Gerwig’s #LittleWomen made the smart call to have the same actress (Florence Pugh) play Amy throughout. When they break up this role to two actresses, it never quite works for me. You lose the consistency and the relationship with the audience.

With all these positive reactions, it makes us want to see this adaptation even more. Greta Gerwig and Oscar Isaac are going to star in a production of Anton Chekhov’s Three Sisters.

Written in 1900 and first performed in 1901 at the Moscow Art Theatre, this infamous Chekhov play follows Olga,  the twenty-eight-year-old matriarchal figure of the Prozorov family, Masha, the twenty-three-year-old sister and young mother, and Irina, the twenty-year-old sister who is convinced she is an adult and deserves to be treated as such. They are used to living life as a cultural elite, but a storm is on the horizon in the form of a revolution. Where will they land?

A play about family and class upheavals, this play is synonymous with Chekhov as much as Uncle Vanya is.

Which makes it big news when Tony-winning director Sam Gold got both Greta Gerwig and Oscar Isaac to stay in this Off Broadway production. It isn’t the first time the three are working together, however, since Gold has directed for stars before, albeit in different plays.

Gold directed Gerwig in the 2014 Off Broadway production of The Village Bike at the Lucille Lortel Theater and Isaac in the 2017 Public Theater production of Hamlet, but this production of Chekhov’s play marks the first time all three will be working together.

After collaborating on numerous films by Joe Swanberg, from Hannah Takes the Stairs to Nights and Weekends, working with her partner Noah Baumbach on films from Frances Ha (which got her a Golden Globe nomination) to Mistress America, and being featured in films Maggie’s Plan and Jackie, Gerwig wrote and directed her solo debut Lady Bird.

This won her another Golden Globe and the 2017 Academy Award nominations for Best Director and Best Original Screenplay.

Oscar Isaac might be known for performances in films including X-Men: Apocalypse and Star Wars: The Force Awakens, but he has an extensive stage resume. Among other stage credits, he’s worked on productions for Romeo and Juliet, The Two Gentlemen of Verona, and appeared in the Manhattan Theater Club 2011 production of Zoe Kazan’s We Live Here opposite Amy Irving.

This announcement was made Tuesday. Reportedly, Three Sister will be one of the two final performances, the other being Endlings by Celine Song, that will round out the New York Theater Workshop’s 2019/20 season.

While there’s no word on who Gerwig and Isaac have been cast, performance schedules and additional casting are expected to be announced soon.