THE OLD MAN’S LEGACY LIVES ON…

Ernest Hemingway coined the termed “the iceberg theory” which refers to an understated style of writing that concerns itself with surface elements in a story rather than the more preachy approach. In other words, Hemingway respected the intellect of his readers—we can see what’s beneath on our own. This is perhaps one of the reasons the man became so popular, this and his larger than life persona. One could argue that it was his relationship with the world that catered to his relatability and universal appeal. His most notable works are The Sun Also Rises, A Farewell To Arms, For Whom the Bell Tolls and The Old Man and the Sea. The latter, for which Hemingway won the Pulitzer and Noble prize in the 1950s has just been adapted into a play by someone who used to fish with Master Hem himself. 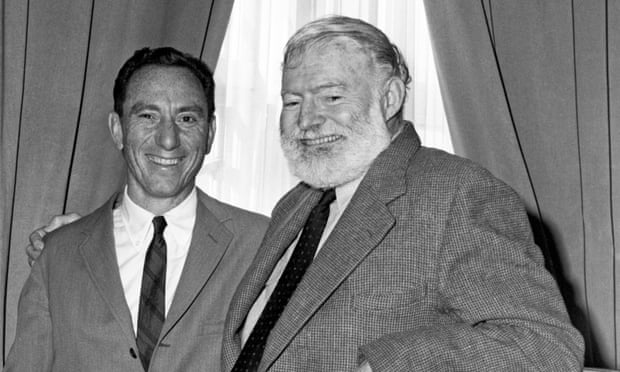 AE Hotchner, a friend and longtime biographer of Hemingway’s during the time in which The Old Man and the Sea was written, promised Ernest he would adapt the novella before he died. The story goes, Hemingway went to see the 1958 John Sturges film version of his book with Hotchner and was dissatisfied (this is a nice word). In a recent interview, Hotchner described Hemingway’s reaction to the film:

“He said, ‘You know, you write a book that you really like and then they do something like that to it, and it’s like pissing in your father’s beer’,” Hotchner said. (Hemingway reserved this particular turn of phrase for a handful of hated adaptations of his work, he said.)

The film was miscast and lacked the novella’s vision. Hemingway asked his friend to take a “crack at it” and now, at 101 years old, Hotchner finally has. The subtext of The Old Man and the Sea more or less has to do with success; while writing The Old Man and the Sea, Hemingway was under a lot of pressure to reclaim his former glory. In the same way that the fisherman Santiago is after his marlin, Master Hem was after the reaffirmation of his own creativity and self-worth. This part of the story was not conveyed as well in the film adaption, it is the part that AE Hotchner wishes to accentuate on stage. He promised his friend he would.

Some people define legacy as the things we leave behind; our relationships, work, and the impression we make on people. It’s easy to get distracted by our careers as we become obsessed with superficial things like money, fame and the fruitless pursuit of immortality. What we can all can take away from Hotchner’s life-long devotion to his friend is a blissful sense of pride in the only immortal thing that has ever existed; beneath it all—the sanctity of human connection. And now, after making a version of Master Hem’s tale for a new audience (not the annoyed teenagers in Mrs. Gross’s high school English class), Hotchner feels he’s honored the connection he once formed with a friend.