Today, we’ll be recommending five of the most thriller and most exciting Crime and Thriller novels this side of the internet has to offer!

You thought we forgot about this one, didn’t you? Well, it might not be January 15th, but that’t doesn’t matter. This book is a hoot whatever time of year it is.

Author of novels such as The Fun We’ve Had and The Strangest and social media editor at Electric Literature and publisher in chief of Civil Coping Mechanisms, an indie press specializing in innovative fiction, nonfiction, and poetry, Seidlinger certainly knows his stuff and shows it off here. 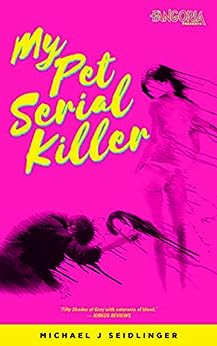 There’s no better way to summarize than the premise, so I’ll just quote Amazon and say, “Claire studies forensic science, Victor is the Gentleman Killer. Clair seduces Victor and keeps him in her apartment as her pet, her darkest secret”.

Kirkus Reivews writes that this book is “[a] stab at satire that’s certainly not for all tastes,” but we here at Bookstr think this book defies categorization. Funny, horrifying, fast, melodic, this book is, above all, a wild ride.

4-You Were Made For This by Michele Sacks

Image Via The Gloss Magazine

She brought us the wonderful short story collection Stone Baby (December 2017) and come June 19th she slipped her debut novel right past us, but thankfully we caught it just in time! What’s it about? I hear you ask. Well… 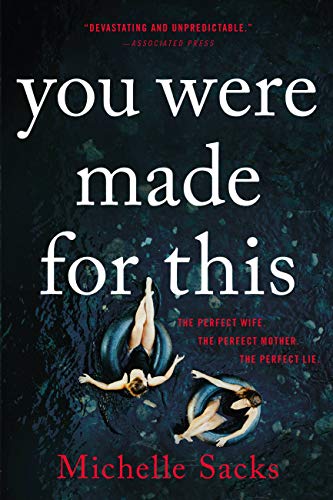 Merry, Sam, and Conor are the idyllic family unit that find the perfect place to live: a Swedish paradise. But when an old friend from Merry’s childhood, Frank, visits the family, she immediately has a connection with young Conor, Sam, even the neighbors.

Frank and Merry have known each other all their lives and are more like siblings than best friends. They are practically family, and family sometimes knows you better than you know yourself…

Kirkus Reivews writes that this book is “[h]ard to read but also bewitchingly hard to put down—a fitting contradiction in a novel that explores the corruption at the heart of beauty”. We here at Bookstr offer you a warning: the novel goes places you wouldn’t expect and when it gets there, you stomach might tell you stop reading but your eyes just can’t.

She’s written for young adults before, but now Baker is trying her hand in adult fiction and, yes, we hope she continues. 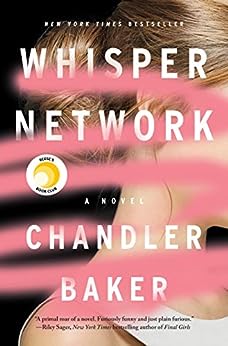 We got Sloane, Ardie, Grace, and Rosalita. They’ve all worked at Truviv, Inc. for years, but when the company’s CEO finally dies that means that their boss, Ames, will likely take over the entire company. Ames has a different relationship with each of his workers, but he has a whispered reputation that have largely been ignored, swept under the rug, left to dissipate like smoke.

Then when Ames makes an inappropriate move on a colleague, these women aren’t going to let it go. Enough is enough, the time is now. But what comes of that?

Kirkus Reviews calls this July 2nd releases not only “[o]ver-the-top in all the right ways”, but also “[v]iciously funny and compulsively readable, Baker’s first adult novel is a feminist thriller for the #MeToo era”. What more do you need to know?

2-Speaking of Summer by Kalisha Buckhanon 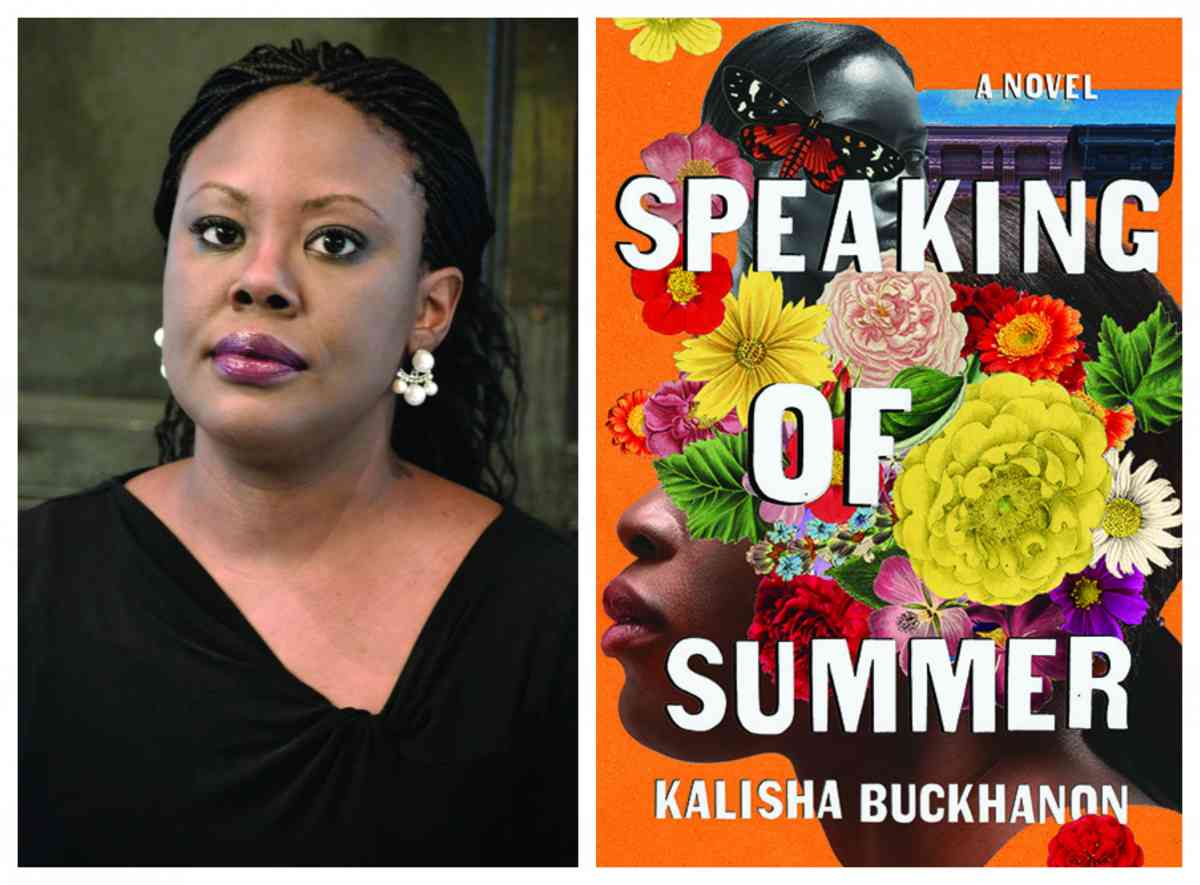 Image Via the Seminary Co-op Bookstores

In addition to authoring several books such as Solemn, Conception, and Upstate, Buckhanon has also made appearances on Investigation Discovery, BET, and TV One as a true crime expert in cases involving women. With her latest book, she puts her expertise to the test.

Back on a cold December evening, Autumn Spencer’s twin sister, Summer, walks onto the roof of their shared Harlem brownstone and is never seen again. The door to the roof is locked, and the snow holds only one set of footprints. A perplexing case, and the authorities aren’t interested in putting the effort required to find “another missing black woman”.

Thus, it’s up to Autumn to find her sister at all costs, even as her own mind starts to unravel.

Kirkus Reviews notes “the accurate portrayal of one woman’s struggles with mental health” and we here at Bookstr praise Buckhanon for her ability to balance both a thrilling chase while exploring issues of race, gender, violence, and the inner-self. The book came out July 30th, so there’s no excuse not to have read this book.

1-The Man Who Came Uptown by George Pelecanos

With more than 20 detective stories to his name, Pelecanos has made a name not only as a prolific author but as a writer in general. A frequent collaborator with David Simon, he’s written multiple episodes of Simon’s HBO series The Wire and Treme and has co-created the HBO series The Deuce.

Now he comes at us with a new book and, trust me, you won’t want to miss it. 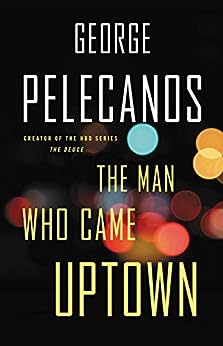 Michael Hudson is the prison library’s book worm, always eager for more, until the day he’s released after it’s revealed a private detective manipulated a witness in his trial.

Once outside, Michael finds that Washington D.C. has changed a lot during his time in the brink. Lost and confused, trying to balance a new job and surrounded by those who thinks he’s guilty, Michael struggles to find his place in a world of temptations. Things only get worse when he’s confronted by the man who got him released, and his temptation for crime goes towards the extreme.

So while much of this story is classic crime noir — Will Ornazian go too far? Will Hudson wind up busted and back behind bars? — I found myself also reading the book for the Proustian madeleines that Pelecanos serves us: the names of the novels so many of us loved over the years and what those tales mean to the man who came uptown.

Kirkus Reviews tells us that:

Using his customary knowing dialogue and stripped-down, soulful prose, Pelecanos skillfully, sensitively works the urban frontier where the problems and stresses of everyday life cross the line into the sort of criminal behavior that could tempt anyone—anyone at all.

We here at Bookstr say:

And you definitely should. It was released September 4th, so what are you waiting for?

These eerie page-turners from debut and bestselling authors are sure-fire summer hits. “In the hands of a master of suspense like Bell, a chance flirtation at an airport leads to a fast-paced novel filled with turbulence. Make sure your belt is fastened and enjoy! Bell is at his best.”—Kaira Rouda, USA Today bestselling author of Best Day Ever

In this high concept psychological suspense novel from USA Today bestselling author David Bell, a chance meeting—and passionate kiss—with a beautiful woman in an airport sends a man on a pulse-pounding quest for the truth. “Girls Like Us is something special: A beautiful, deeply textured novel and a poignant, surprising mystery. I loved it, every chapter and every word. I’m going to be thinking about it as a reader, a father, and a storyteller for a long, long time.”—Chris Bohjalian, author of The Flight Attendant

Girls Like Us is Cristina Alger’s best book yet. Worlds collide when an FBI agent investigates a string of grisly murders on Long Island that raises the impossible question: What happens when the primary suspect is your father?

3. LOCK EVERY DOOR by Riley Sager A young woman has a new job apartment sitting in one of New York’s oldest and most glamorous buildings…but it may cost more than it pays. Super eerie, this heart-pounding thriller from Riley Sager is sure to be another bestseller.

4. The Escape Room by Megan Goldin Four young Wall Street rising stars discover the price of ambition when an escape room challenge turns into a lethal game of revenge in this gripping debut from Megan Goldin. In the lucrative world of finance, Vincent, Jules, Sylvie, and Sam are at the top of their game. They’ve mastered the art of the deal and celebrate their success lavishly―but a life of extreme luxury always comes at a cost. “Exciting and sprinkled with razor-sharp insights about what it is to be a woman today, Whisper Network is a witty and timely story that will make you cheer for sisterhood.”
―Liv Constantine, USA Today bestselling author of The Last Mrs. Parrish

“If only you had listened to us,” they tell us on page one, “none of this would have happened.”

Sloane and her colleagues’ decision to take a stand against an inappropriate boss sets in motion a catastrophic shift in the office. Lies are uncovered, and secrets exposed. And not everyone will survive. All of their lives―as women, colleagues, mothers, wives, friends, even adversaries―will change dramatically as a result.

6. The Last Resort by Marissa Stapley As a deadly tropical storm descends on the Mayan Riviera coast, trapping the hosts and the guests on the resort, secrets are revealed, loyalties are tested and not one single person—or their marriage—will remain unchanged by what follows.

7. A Stranger on the Beach by Michele Campbell “Fans of Ruth Ware and Gillian Flynn meet your next obsession.” ―BuzzFeed

Michele Campbell’s edge-of-your seat story of passion and intrigue will keep you guessing until the very end. Caroline Stark’s beach house was supposed to showcase what she thought was her perfect family. But after a very public fight with her husband, she realizes things may not be as perfect as they seem: her husband is lying to her, the money is disappearing, and there’s a stranger on the beach outside her house.

8. THOSE PEOPLE by Louise Candlish In Louise Candlish’s startling domestic suspense novel set in a suburban neighborhood poses the question: “Could your neighbor make you angry enough to kill?” Lowland Way is the epitome of the suburban dream. Every house and yard is carefully maintained for maximum curb appeal, and everyone knows one another and gets along. When Darren and Jodie move in, the neighborhood changes for the worse. An all-out war is brewing on Lowland Way, and when someone is killed, accusations start flying.