END_OF_DOCUMENT_TOKEN_TO_BE_REPLACED

Some of you may have seen the new CATS movie adaptation. For those that have, and to T.S. Eliot who must be rolling in his grave, I offer my deepest condolences. At least the entire experience has offered us an everlasting vault of comedic material. The newest treasure in our little trove comes from Twitter user Jack Waz:

A VFX producer friend of a friend was hired in November to finish some of the 400 effects shots in @catsmovie. His entire job was to remove CGI buttholes that had been inserted a few months before. Which means that, somewhere out there, there exists a butthole cut of Cats

I’m not sure this man knew what he was getting into, but this triggered something deep inside the Internet and thanks to him the hashtag #ReleaseTheButtholeCut is now trending. Here are a couple of the best:

Just imagine, you worked your ass off to get through college to become a CGI artist. Eventually, you land a job in Hollywood, and then one day you’re hired to draw 400 cat buttholes, and then, THEN, someone comes along and erases all your buttholes. #ReleaseTheButtholeCut https://t.co/Gb8aOqSrIR

Our society is collapsing our world is teetering on the edge of utter chaos please please we need this #ReleaseTheButtholeCut https://t.co/Dn5y7pKLuc

Aren’t you so glad there’s a bit of light in these trying times? For god’s sake, give the people what they need and release the buttholes!

A list of poems about cats to get you ready for the book-of-poems-turned-musical-turned-nightmarish-film called Cats? Oh yes.

For those not in the loop, the musical Cats was originally inspired by a short book of cat poems written by T.S. Eliot. Did actors and actresses walk around the stage wearing cat costumes? Yes. Has the musical become both a theatrical classic and a joke? You bet.

And now, with the film premiering in the United States in but a few days, should we be ready for an uncanny valley nightmare? Yes.

Am I still going to go watch it?

And am I going to use this film’s premiere as an excuse to share five poems about cats?

Here are five poems about cats for your reading consumption. The cat went here and there
And the moon spun round like a top,
And the nearest kin of the moon,
The creeping cat, looked up.
Black Minnaloushe stared at the moon,
For, wander and wail as he would,
The pure cold light in the sky
Troubled his animal blood.
Minnaloushe runs in the grass
Lifting his delicate feet.
Do you dance, Minnaloushe, do you dance?
When two close kindred meet,
What better than call a dance?
Maybe the moon may learn,
Tired of that courtly fashion,
A new dance turn. [read more] Winter. Time to eat fat
and watch hockey. In the pewter mornings, the cat,
a black fur sausage with yellow
Houdini eyes, jumps up on the bed and tries
to get onto my head. It’s his
way of telling whether or not I’m dead.
If I’m not, he wants to be scratched; if I am
He’ll think of something. He settles
on my chest, breathing his breath
of burped-up meat and musty sofas,
purring like a washboard. Some other tomcat,
not yet a capon, has been spraying our front door,
declaring war. It’s all about sex and territory,
which are what will finish us off
in the long run. Some cat owners around here
should snip a few testicles. If we wise
hominids were sensible, we’d do that too,
or eat our young, like sharks. [read more] Both ardent lovers and austere scholars
Love in their mature years
The strong and gentle cats, pride of the house,
Who like them are sedentary and sensitive to cold.

Friends of learning and sensual pleasure,
They seek the silence and the horror of darkness;
Erebus would have used them as his gloomy steeds:
If their pride could let them stoop to bondage. [read more]

4. “The cats will know” by cesare Pavese (translation by geoffrey brock) Rain will fall again
on your smooth pavement,
a light rain like
a breath or a step.
The breeze and the dawn
will flourish again
when you return,
as if beneath your step.
Between flowers and sills
the cats will know.
There will be other days,
there will be other voices.
You will smile alone.
The cats will know.
You will hear words
old and spent and useless
like costumes left over
from yesterday’s parties. [read more] The Naming of Cats is a difficult matter,
It isn’t just one of your holiday games;
You may think at first I’m as mad as a hatter
When I tell you, a cat must have THREE DIFFERENT NAMES.
First of all, there’s the name that the family use daily,
Such as Peter, Augustus, Alonzo, or James,
Such as Victor or Jonathan, George or Bill Bailey—
All of them sensible everyday names.
There are fancier names if you think they sound sweeter,
Some for the gentlemen, some for the dames:
Such as Plato, Admetus, Electra, Demeter—
But all of them sensible everyday names,
But I tell you, a cat needs a name that’s particular,
A name that’s peculiar, and more dignified,
Else how can he keep up his tail perpendicular,
Or spread out his whiskers, or cherish his pride?
Of names of this kind, I can give you a quorum,
Such as Munkustrap, Quaxo, or Coricopat,
Such as Bombalurina, or else Jellylorum—
Names that never belong to more than one cat.
But above and beyond there’s still one name left over,
And that is the name that you never will guess;
The name that no human research can discover—
But THE CAT HIMSELF KNOWS, and will never confess.
When you notice a cat in profound meditation,
The reason, I tell you, is always the same:
His mind is engaged in a rapt contemplation
Of the thought, of the thought, of the thought of his name:
His ineffable effable
Effanineffable
Deep and inscrutable singular name.
Cover image via Collider
Bookstr is community supported. If you enjoy Bookstr’s articles, quizzes, graphics and videos, please join our Patreon to support our writers and creators or donate to our Paypal and help Bookstr to keep supporting the book loving community.
Become a Patron!

During the summer, the first trailer for the feature length adaptation of the musical Cats was released, and the internet was set on fire due to the terrifying looks of the actors as they were transformed into CGI-humanoid cats. I mean, just look at these guys: 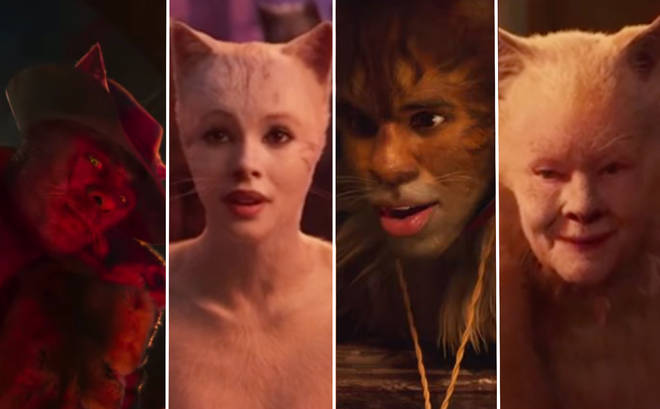 The negative reception to the special effects hasn’t stopped the film from releasing this Christmas, and today, Universal Pictures released a new trailer for the film. This trailer comes packed with more singing, dancing, and cat jokes:

Based on Andrew Lloyd Weber’s musical, which is based on T.S. Eloit’s book of poems titled Old Possum’s Book of Practical Cats, Cats follows a cat named Victoria as she interacts with the tribe of “Jellicle” cats who are competing to see who will be chosen to ascend into the “Heaviside Layer” and come back to a new life.

as soon as I saw @catsmovie gave the lady cats breasts, I should have assumed someone would shake them while dancing but I still wasn’t prepared for the reality of what that would look like… pic.twitter.com/tT24lyBcAG

Its been a stellar year for book adaptations, but there’s still plenty of them on the way to close out 2019! From TV to film, lots of book adaptations are coming to your screens this winter and there’s a huge helping to binge into. Let’s dive into this list and see what are some of the best and coolest looking page to screen adaptations coming this fall! The Good Lair by Nicholas Searle is about a smarmy con man who decides to his latest con will be a wealthy widow he meets online, determined to swindle her of her veritable fortune. But maybe he actually starts falling for her and finds himself more attached to the widow than he realizes. For her part, the widow is more than she seems. The movie adaptation comes November 15th, starring Ian McKellen and Helen Mirren and is sure to be an intriguing adaptation of the novel for nothing else but its stellar cast. Did you know Cats was a based on a book? Yep! Old Possum’s Book of Practical Cats  is where Andrew Lloyd Webber drew inspiration from for his famous musical and where the movie will draw some inspiration from too (probably). Although this movie looks very odd and strange from the teasers (Taylor Swift as a cat person…nightmare fuel), you know you’re going to be lining up to see it nonetheless. After all, what will it look like on the big screen? Most of you probably know Little Women but its a classic of American literature. Focusing on the March sisters as they come into womanhood and find their way in the world, this new adaptation promises to be the closest to the material yet. It stars Emma Watson, Timothée Chalamet, Saoirse Ronan, and Laura Dern. To get your fix of more content of this novel, check this out come December 25th! Doctor Sleep was the sequel to one of Stephen King’s most exciting novels, The Shining. Focusing on Dan Torrance, the boy protagonist of the original novel, now a middle aged man and a 12 year old girl who shares his psychic powers gift. Together, they must fight off a tribe of murderous paranormals who want the young girl for what she represents. The film promises to be just as exciting, starring Ewan MacGregor and revisiting a lot of nostalgia for the movie adaptation by Stanley Kubrick. Plus, it looks scary as hell. We can’t wait for this one to launch.