You may skip over them or you may read them diligently, but author dedications are one of my favorite parts of reading a book! Some of them are sweet, other are heart-breaking, but sometimes you stumble upon that one dedication in a book that just makes you laugh so hard your stomach hurts.

END_OF_DOCUMENT_TOKEN_TO_BE_REPLACED

Dedicating your new book to a family member is very common amongst authors. Every once in a while, one is so sweet and funny that many take notice.

That was the case with Ben Philippe, a young author who just released his debut young-adult novel The Field Guide To The North American Teenager last week. Philippe dedicated the book to his mother, Belzie. But it’s what Philippe wrote next that got people’s attention. 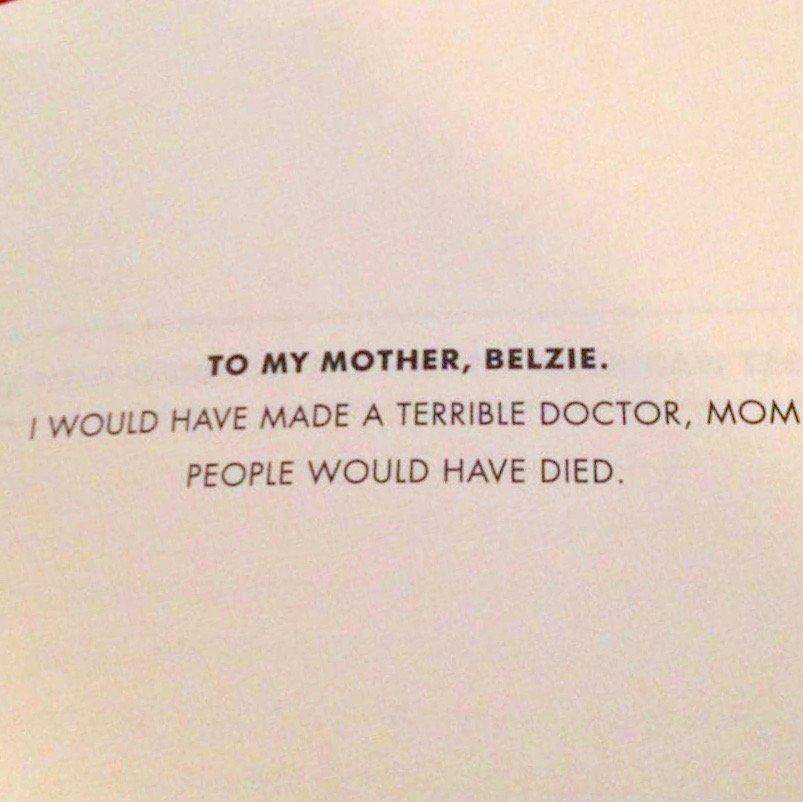 In an interview with Forbes, Philippe said that the humorous message was a nod to how many parents like to prioritize financial security amongst their kids and how a career in the arts doesn’t make them feel better.

“I think some parents see the arts as a state of permanent unrest for their kids. Financial safety doesn’t look like multiple part-time jobs, ‘gigs,’ or chugging coffee working on a manuscript at 2 a.m.”

Nevertheless, Philippe said that his mother liked the dedication.

And so did many others. Once the book was talked about on a podcast from BookRiot, several people on Twitter began sharing photos of the dedication on Twitter, with thousands of likes following each post. Here are two of them:

I’ve seen a few folks post about this, but now that I have a copy, it’s my turn.

And this is the funniest dedication I’ve ever seen. pic.twitter.com/w8wkZNIDNt

I guess that’s one way to get the word out about your new book.

The dedication portion of a book is on of the most oft skipped over, for understandable reasons. After all, what do any of us care about the personal affections of an author we’ve never met? But for this reason, the dedication page is an opportunity for authors to slip in little jokes like small treasures uncovered only by that completionist breed of readers who must read every single line of text in a volume, including the copyright.

Dedicated to the strongest person I know: me.

Image Via The Happi Empire

2. Franny and Zooey, by J.D. Salinger

As nearly as possible in the spirit of Matthew Salinger, age one, urging a luncheon companion to accept a cool lima bean, I urge my editor, mentor and (heaven help him) closest friend, William Shawn, genius domus of The New Yorker, lover of the long shot, protector of the unprolific, defender of the hopelessly flamboyant, most unreasonably modest of born great artist-editors to accept this pretty skimpy-looking book.

You’re a really great guy, but I’m married, so I think we should just be friends.

Everything not saved will be lost.

To anyone who has ever gone through the pain of a Brazilian wax.

6. The Pirates! series, by Gideon Defoe

To Sophie, who has a quarter of a million pounds.

To Sophie, who still has a quarter of a million pounds of which I have not seen a single penny, even though this is the second entire book that I have dedicated to her.

To Sophie, who, taking into account the effects of compound interest, must have even more than a quarter of a million pounds by now, so this is her absolute last chance to do right by me or else I’m dedicating Book Four to that billionaire Onassis girl, or maybe the really nice one out of Lost.

Don’t start crying about it now, Sophie. I warned you this was on the cards.

To Peter Lord, who has his own film studio. You can’t compete with that, can you, Sophie?

For all the fat bottomed girls.

8. The Wishing Spell, by Chris Colfer

To Grandma, for being my first editor and giving me the best writing advice I’ve ever received: “Christopher, I think you should wait until you’re done with elementary school before worrying about being a failed writer.”

9. No Way Back, by Matthew Klein

This book be dedicated to Kanye West, because he’ll never fuckin’ read it.

11. Graduate Texts In Mathematics – An Introduction To Algebraic Topology, by Joseph J. Rotman

and my children Ella Rose and Daniel Adam

without whom this book would have been completed two years earlier.

12. Visions of Cody, by Jack Kerouac

Dedicated to America, whatever that is.

I want to thank everyone who helped me create this book, except for that guy who yelled at me in Kmart when I was eight because he thought I was being “too rowdy.”

To everyone who read the first (horrible) draft of this story and did not laugh when twelve-year-old me said, “Someday I’m going to get this published.”

You know how it is. You pick up a book, flip to the dedication, and find that, once again, the author has dedicated a book to someone else and not to you.

Because we haven’t yet met/have only a glancing acquaintance/are just crazy about each other/haven’t seen each other in much too long/are in some way related/will never meet, but will, I trust, despite that, always think fondly of each other!

This one’s for you.

With you know what, and you probably know why.