Of course, readers love cats. They’re just about the only animal who appreciates the long stretches of stillness and dead silence that reading involves. Book lovers don’t just love cats, though—cats love books. Here are five cats who’ve taken their love of books to the next level—as resident librarians at various libraries.

No, she’s not winking—she just has one green eye and one amber. Aside from her dazzling good looks, Elsie does a lot of hard work sleeping and making friends. Dogs and cats both come to visit her, as well as the patrons who come for books but stay for her fluff. She’s named one of the library’s patrons, but sometimes they pronounce it L. C.—for library cat. She’s also there to cheer-lead for the staff and give them updates.

Trixie was left outside the library one autumn, so she was taken in and made some friends. She’s smol (cannon), and enjoys books, pets, and sleeping through important meetings. The library also has a rabbit called Grace. She isn’t a stray though—she’s a therapy rabbit. She doesn’t have her own page yet, but we can always hold out hope. ‘Library Cat’ is more of a title than a name, bestowed first to this tuxedo, who actually wrote a book (I BELIEVE). Unfortunately the OG Library Cat is no longer with us. He was replaced by this probable cryptid. Nyx, or Goddess of the Night, if you like epithets, is seen here wearing a flower crown and looking absolutely iconic. Nyx is a service cat who now telecommutes, and she proves you don’t need eyes to love books. Her favorite form of transportation is a library cart, and she likes to both help and hinder computer work. 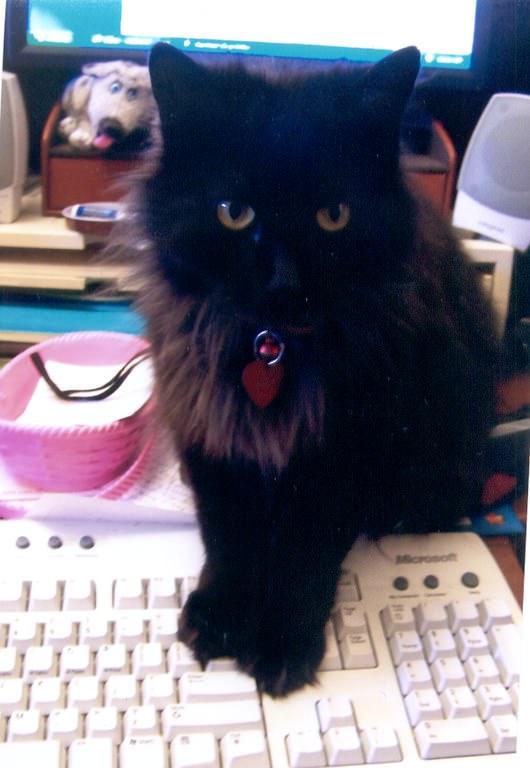 Stacks works hard. She might not be the best typist, but she tries her very best, and she’s been known to put in long hours manning (catting?) the circulation desk. She also likes to help with computer work and reshelving, and modeling for her own line of mugs and shirts (the profits go to the library and to pet adoption). This isn’t enough for her, though. In her spare time, she takes donations to support herself. What a proactive soot sprite.