In honor of 'The Green Knight' hitting theaters today, here are five classic Arthurian legends full of adventure, battle, love, and magic that you should read.

END_OF_DOCUMENT_TOKEN_TO_BE_REPLACED

Fans of Arthurian tales, behold! A new, official trailer for 'The Green Knight' was released on May 11th. This movie was originally scheduled to debut at the 2020 SXSW festival and premiere in theaters in May 2020, but was postponed due to the global COVID-19 pandemic, according to Ars Technica.

END_OF_DOCUMENT_TOKEN_TO_BE_REPLACED

We're at the beginning of the month again with a new roster of fantasy books to dive into. Who's excited? We're looking at some very exciting series sequels alongside publications that promise more books to follow.

Here are five fantasy books coming out this month!

END_OF_DOCUMENT_TOKEN_TO_BE_REPLACED King Arthur, The Knights of the Round Table, Genevieve, Lancelot, Merlin, Yonec, Lanval, the dead nightingale from Laüstic—some of the most beloved characters have been derived from Medieval literature. We’ve all come to know and love the kind of chivalry and courtly fraternity found in classic tales like The Story of the Holy Grail, Lancelot: The Knight of the Cart, Sir Gawain and the Green Knight, The Death of King Arthur/Le Morte d’Arthur (thanks Lancelot, you backstabbing womanizer), and films such as Monty Python and the Holy Grail…

We may feel like we know these tales well, but a surprise twist in the didactic narrative that is life may prove otherwise. Seven pages of original, never-before-seen medieval manuscript were discovered in a Bristol Library. A librarian was acting on pure book-loving, under-appreciated occupational instinct when he noticed the names of characters like Merlin and King Arthur right off the bat on pages found within a 16th-century book. The pages are thought to have come from a 14th-century Old French sequence of texts known as the Vulgate Cycle or Lancelot-Grail Cycle—the Lancelot-Grail Cycle being used by Sir Thomas Malory as inspiration for The Death of King Arthur.  The story discovered is thought to be a version of Estoire de Merlin, a Merlin-centric tale. As of now, experts believe it outlines some classic plot points with some subtle and dramatic differences…

In an interview, Dr. Leath Tehther, leader of the research team, explained:

We cant put two and two together but we saw that in general battle sequences theres more detail, they’re more extended and the way in which a character dies is different.

In the discovered text, Merlin rallies Arthur’s troops for an epic battle before running off with a flaming sword (Lightbringer *cough* GoT reference *cough*). Experts have not yet fully translated the text but will use #smarts and #science to do so. This sequence is just the tip of the iceberg when it comes to what could be discovered in these new pages; it could potentially change the way Arthurian Romance classes are taught—not just in Bristol, but around the world. Maybe. 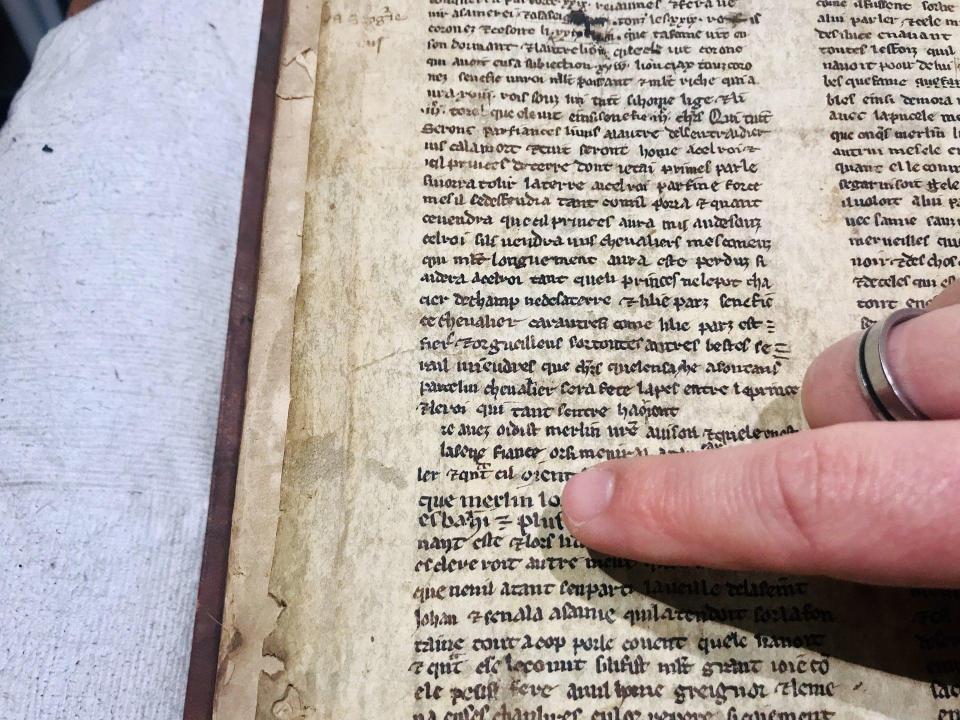 “These fragments of the Story of Merlin are a wonderfully exciting find, which may have implications for the study not just of this text but also of other related and later texts that have shaped our modern understanding of the Arthurian legend.

Time and research will reveal what further secrets about the legends of Arthur, Merlin and the Holy Grail these fragments might hold.”