The world has been regaled by the entertaining mysteries of master of deduction, Sherlock Holmes, even before Sir Arthur Conan Doyle’s first book, The Adventures of Sherlock Holmes, was published in 1892. As he had been publishing his Holmes stories in magazines since 1887, Conan Doyle harvested a huge following that would come to know his name, his mysteries, and rush madly to buy his first book.

Today is the 128th anniversary of this renowned first collection of stories, and the fervor of the fandom is just as dedicated as ever. New twists and retellings of the original stories are continually conceived, and the collection of these adaptations could go on for ages.

In celebration of the enigmatic mind that everyone can’t seem get enough of, here is a chronological count-down of (only some of) the unique adaptations of Sherlock’s Holmes’ original story throughout the years that are worth watching:

The most recent lens through which to consume new Sherlock Holmes material is found in the Netflix Original, Enola Holmes, which was released on September 23rd  of this year. Millie Bobby Brown, the female lead of Stranger Things (another Netflix Original) and 2019 film, Godzilla, plays the free-spirited Enola Holmes; younger sister of Sherlock and Mycroft Holmes and narrator throughout the film. When her mother, Eudoria Holmes, leaves under precarious circumstances, Enola is left at home to discover the mystery of her mother’s disappearance (with Sherlock’s help), and to transition to a boarding school (as she is now Mycrofts ward). However, staying at home and learning how to be a lady is the last thing that she has planned. This newest adaption explores beyond Sherlock, the genius extraordinaire himself, and dives head first into the unseen aspects of Holmes fiction thus far: his family.

A completely new angle in which to view the irreverent detective is found in Mr. Holmes. This 2015 film imagines the later life of the Sherlock Holmes in 1947, showing how his mystery solving capacities have evolved and altered in his old age. The retired Holmes is played by notorious actor and knight Ian McKellen; famous for many iconic roles such as “Gandalf the Gray” in The Lord of the Rings and The Hobbit series, and “Magneto” from the X-Men films. At the age of ninety-three, Mr. Holmes attempts to complete and record his unsolved case, “The Adventure of the Dove Grey Glove,” and the enigmatic woman whom haunts these memories. With his unreliable memory, a young boy and a fan of his life’s work named Roger, may be his best hope.

Elementary (2012 – 2019) twists the traditional Sherlock Holmes mysteries to the format of a modern day investigative crime series. With Johnny Lee Miller as Sherlock Holmes and Lucy Liu as Watson, the dynamic duo is at it again; this time, in New York City. While the original Sherlock Holmes is an unemotional intellectual, Elementary’s partners in (solving) crime are a close-knit pair, connected by devotion, solidarity, medical avarice, and what it means to be there for one another and their community.

As another modern day adaptation of Sir Arthur Conan Doyle’s mysteries, and ten years since it was first released, Sherlock is still on air as one of BBC’s most popular shows. Set around Sherlock’s renowned apartment on 221 Baker Street, the odd yet alluring Sherlock (played by Benedict Cumberbatch) and Watson (played by Martin Freeman) work together to solve crimes that reflect, but also retell, the original cases as seen in the novels. For example, episode one is titled A Study in Pink, after Conan Doyle’s first Sherlock Holmes short story, A Study in Scarlet. This adaptation also keeps particularly close to the detective’s character as a sociopath without willingness for emotional distraction, while amping up the stakes. Sherlock’s next series is anticipated to drop sometime in 2022 or 2023.

Robert Downey Jr. is a fan favorite as Sherlock Holmes, as seen in the 2009 film of the same name, and Sherlock Holmes: Game of Shadows in 2011. These adaptations focus more on the character’s multi-faceted genius, rather than honing in on a singular, albeit incredible, skill for deduction. Another unique addition in these retellings is the frequent use of internal monologue, where Holmes’ rapid-fire, and seemingly inhuman, unraveling of mysteries is revealed in slow motion thought processes. These are films in which Hollywood’s flare for action and comedy ramps up the already heart stopping stories of Conan Doyle’s hero.

Nicholas Rowe stars as the teenage Sherlock Holmes in 1985 film, Young Sherlock Holmes. Written by Christopher Columbus and directed by Barry Levinson, this film portrays the other side to the detective’s narrative; who he was growing up, what obsessions and passions fueled his lifestyle of investigation, how he met Watson (played by Alan Cox), and how his youth would lead to his later success. In a town where people are dropping like flies after erratic visions and delusions, young Sherlock and Watson are on the case.

The world was enamored in ten years of Jeremy Brett as Sherlock Holmes, from 1984 to 1994, in Granada’s Sherlock Holmes. Produced for ITV, the series was comprised of thirty six episodes, each one hour long. This series is regarded as one of the best adaptations of the Sherlock Holmes mysteries, embodying the literary atmosphere to a T and taking minimal liberties. Brett’s Sherlock Holmes is widely believed to be the best depiction of Conan Doyle’s brusque but beloved character, and the popularity that the show garnered is believed to be the inspiration for the reawakening of historical dramas on screen. And, bonus fact, Downton Abbey’s Hugh Bonneville also appeared in this rendition. 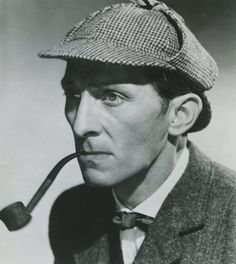 Peter Cushing starred as Sherlock Holmes in the British television series of the same name from 1964 to 1968. The series began with an adapted pilot of Conan Doyle’s, The Speckled Band, as a piece in the series, Detective, and was comprised of sixteen episodes, each fifty minutes long. Cushing’s is the face most see in their mind when they hear the name, Sherlock Holmes. He also played him alongside Christopher Lee in the 1959 film, The Hound of the Baskervilles, and in the 1984 televised rendition of The Masks of Death.

Douglas Wilmer’s Sherlock Holmes came directly before that of Peter Cushing’s, and he is said to have inspired Cushing’s take on the staunch detective.

Wilmer’s performance was widely hailed for its sardonic bite and no-nonsense demeanor– traits that his series replacement, Peter Cushing, would later absorb.

However, Wilmer took issue with the liberties taken in the script in which he was part, which created much conflict between himself and the producer. Regardless of the drama behind the scenes, this series was in the top ten just a year after its debut.

1. The Hound of The Baskervilles

The Hound of the Baskervilles is the most famous of Sherlock Holmes mysteries by Sir. Arthur Conan Doyle, and its 1939 film adaptation stands the test of time as well. Up against a legend seemingly as old as the family in which it’s named after, where the Baskervilles are killed off generation by generation by a vicious and enigmatic hound, a fascinated Sherlock Holmes (played by Basil Rathbone) is on the case. Directed by Sidney Lanfield, and also starring Nigel Bruce and Richard Greene, this early adaptation is the perfect black and white to watch when in the mood for a classic tale and those old-timey feels.

Feature Image Via themindflayer.com
All In-Text Images via Pinterest