We all know that one guy who lurks too closely at the bar watches you a little too intently in the café or heavy-breathes over your shoulder at the gym (and not from the workout). It is lovely to be desired, but sometimes men just need a swift reminder that coming on too strong is not endearing.

Often these men may have romantic intentions, but many seriously underestimate how creepy their actions are. And before I start a fight, I know that many women are guilty of this too. I admit to fogging up a window while staring at a bearded, man-bunned yogi before…

However, I worry that we as readers may have given men the wrong impression by romanticizing the male characters in literature who are, in fact, total creeps. Here are some male characters who needed to be rejected before their behaviors got out of hand.

I totally get the appeal. He is rugged, he is brooding, he is in love, he is tragic, he is traumatized… Romantic as he is, I cannot ever see myself appreciating one of my exes digging up my grave many years after my burial and passionately cradling my rotten bones… He is also violent and hellbent on revenge… I wouldn’t recommend dating him unless you see yourself endlessly trying to live up to the legacy of his beloved Cathy…

Again, I understand the appeal. This is the man who expertly tells you everything you want to hear. He is charming and suave and looks like a young Hugh Grant in the film adaptation. He manipulates you without you even realizing it. Well, until it’s too late. I do not care how you try to spin it… if a man attempts to seduce and/or marry your underage sisters, he is just not right for you.

I refuse to hear your objections. This guy would technically be 116 years old today. He preys (figuratively and literally) on a 16-year-old Bella. He tries with all his might to not kill her and is often miffed that he isn’t privy to all her thoughts. Pair this with his incessant need to watch her sleep, repeatedly smell her and constantly sulk if she sees Jacob (her friend) and you have all the markings of an obsessive old man who wants to store/preserve/eat you. He also couldn’t take you on a day-date without glistening, and no amount of highlighter on your cheeks is going to match him (sorry ladies…).

Last, but certainly not least, is the pièce de résistance…. Mr. Christian Stalker-Abuser-Manipulator-Creeper Grey. This sulky little man is used to getting what he wants, and you’re damned if you try to reject him. He will use “his people,” his money, his resources, his strength and his mind games to find you and own you. From the very first book in the trilogy, Christian has located Ana at her workplace, he demands that she refer to him as “Sir” or “Mr. Grey,” and he even orders food and drinks for her.

The manipulation is rife: he warns her (“you should find me intimidating”), then rejects her, then buys her excessive gifts, then tries to win her back, and stalks her again, and again. He begins to isolate her from her friends and family and let’s not forget the non-disclosure agreement that Ana is ultimately forced to sign, despite having no experience of sex, BDSM, or relationships. Christian becomes completely overbearing and possessive, repeatedly using sex to remind Ana that she is ‘owned.’ “Every time you move tomorrow, I want you to be reminded that I’ve been here. Only me. You are mine.” So not cute. Even if you try to defend any of these appalling acts, you cannot argue that Christian even rapes Ana after she has kicked him and told him no repeatedly. His response? “If you struggle, I’ll tie your feet, too. If you make a noise, Anastasia, I will gag you. Keep quiet.”

He continues to deny her space and privacy, he only considers his feelings, he uses sex as a form of control, and then readers are expected to condone his abuse because he was once victimized himself. I don’t care if you believe he is truly reformed by the end of these books, he completely abuses Ana. I will leave you with this little gem: 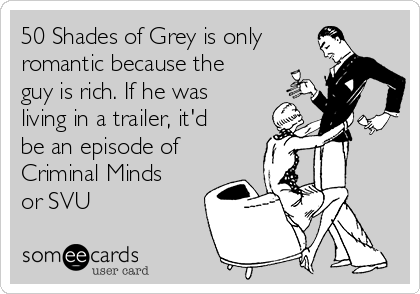 Finally, I hope that we stop romanticizing the creepiest men in literature… Call me old-fashioned, but I would rather attend a romantic date with a man who won’t cradle my corpse, marry my sisters, eat me or legally bind me into subservience.