In the wake of George Floyd’s murder at the hands of a cop, workers across the book industry declared June 8th a Day of Solidarity to show their support for the protesters.  While the CEOs of the Big Five publishing companies all sent out emails addressing the current political turmoil, a lot of employees considered what they had to say inadequate. More than 1,100 people took part in the protest, taking the day off and donating their pay to a fundraiser of their choice directed towards fighting white supremacy. The goal was to disrupt a system that has disproportionately showcased the voices of white people for decades, calling on publishers to diversify their workplace and publish more black authors.

At the beginning of the day each person participating in the protest took to their email to post an out-of-office message explaining why they were not available.  The message read as follows.

“Today, June 8, 2020, workers in publishing and media commit to a day of action in solidarity with the uprisings across the United States in response to the murders of George Floyd, Breonna Taylor, Ahmaud Arbery, Tony McDade, and the many, many others in the long history of Black people murdered by the state.

We stand together against the systems of white supremacy and racial capitalism that legislate these murders and today refuse to participate in complicity. And we dedicate this day to acts of service towards that end (protesting, phone-banking, donating, providing mutual aid, working on books by Black authors). As BIPOC and allies, we also set this day aside for Black publishing workers to rest and heal. If you stand in support of the cause, consider a donation to one of the many fundraisers providing material support to the grieving families and the protesters out on the streets.

A list of fundraisers can be found here: https://docs.google.com/spreadsheets/d/1Pf76L5azQN9ahbhbt7MRmKb5sBZgeUWbXKLoPJO592Y/edit#gid=0

I will be donating one day’s pay to [insert fundraiser] as part of this day of solidarity. I hope you will join me.” 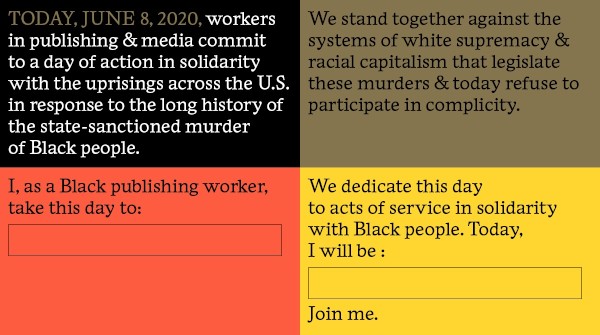 The intention of the protest was to keep the attention on black voices while also focusing on self education and furthering the Black Lives Matter cause.  According to a letter sent to Publisher’s Weekly by the organizers of the protest, it was “meant to be disruptive—our goal in this action is not to collaborate with corporate publishers on demands we might make but to build separate, collective power across the people who work in this industry.”

A lot of the attention so far has been directed towards the top of the power structures, calling on the heads of the publishing companies to put effort into diversity. The Day of Solidarity is an example of an equally important movement, a democratic, grassroots effort that will hopefully be more pervasive in the industry.  The most powerful people in the publishing industry must make changes but they will never make those changes if the rest of us do not hold them accountable.

On June 9th, three of the Big Five responded. Hachette and Simon & Schuster released more comprehensive statements detailing exactly how they plan to bring more diversity into publishing. Penguin Random House in particular put their money where their mouth is, donating to several different diversity groups. HarperCollins and Macmillan have yet to respond.