This is maybe the most important thing to talk about, but I do feel like I’m giving away my take a little. I think Game of Thrones did something extremely important for fantasy TV, and that’s just that it took it seriously. So often, fantasy made for adults seems to be embarrassed that it’s fantasy made for adults. If you think it’s uncool, don’t make it! Anyway, Game of Thrones had a huge budget and also some self respect. This meant we could have actual, serious fantasy and even more intense sci-fi shows that are sincere and just great, in a way that felt new or at least improved. Immediately I think of shows like Wynonna Earp and Killjoys, but there are countless examples, including, of course, The Witcher.

Image via My Creative Ramblings

So both shows are rated R, and both have plenty of sex and violence. The only thing I can really say about the violence is that I think it feels more natural in The Witcher. Not that Game of Thrones didn’t have its moments. I thought Danerys putting the slavers on pikes felt very much part of the story. Some of it felt like it just wanted to be gratuitous and shocking though, to the point where it felt like a stretch. Sewing Rob Stark’s wolf’s head onto his body is gross, and it did catch my attention, but they just threw it in a river, so it felt like it was for me, and not for in-story reasons. Compare this to the scene when they’re hiking toward the dragon and that poor hungry, sentient creature gets its arms and then head lopped off. It’s gruesome, and it shows us that the lord who does it is stupid, but we could have been shown that in plenty of ways. So why was this the scene we got?

Bear with me because I actually want to go back to the episode in the Mayor’s house, because I think it’s a good example of The Witcher playing off of Game of Thrones. When Geralt comes in, Yennefer has a bunch of hypnotized people having an orgy. Now, this is a scene that Game of Thrones might have played completely straight, and indeed there are probably hundreds of scenes in Game of Thrones that are horny for no reason. Maybe they want to really earn their R rating cred. But in The Witcher, this scene is very deliberately kind of cringe. Geralt isn’t impressed, and you’re clearly not meant to be either. It’s silly, and a little gross. The scene later in the episode where Geralt and Yennefer hook up after collapsing the house is played almost for pure humor. Yeah, they’re both hot, I’m intensely bisexual, but it’s not played as tantalizing. As much as The Witcher takes itself seriously as a piece of media, it doesn’t shy from poking fun at itself, and (at least I think) at Game of Thrones. This is the tone I see too in the beheading scene. Yes, sometimes The Witcher plays violence seriously, like with the Striga, but you’ll notice that that’s a scene where Geralt is trying to avoid violence. Any time things go all Game of Thrones, to I guess coin a term, it’s always kind of ironic.

There was obviously a ton of magic in Game of Thrones, through gods, through creatures like dragons, and my favorite, through the landscape, like the north wall being implicitly built/fortified by magic. That said, especially within the limitations of a TV show, this sometimes made me feel like I didn’t really know what was possible or impossible with magic, or how. We got some solid rules with faceless men, for example, but I was never sure what the Lord of Light could do. Was it all children based? We’ll come back to that. Don’t worry.

Magic in The Witcher does also have some problems. It made a lot of sense to me when Yennefer took all that fire from the castle and poured it over the battlefield. I haven’t read the books (I didn’t realize!) so I can’t get any info there. Stick with me as I try to figure this out. Float a rock, you lose a hand. Yennefer makes all those portals for the princess and her daughter, but it seems like she’s drawing on her own energy, since it tires her out. Then, channeling the fire tires her out. So you need a source of energy, you need your own power presumably to control or focus it, and you obviously need skill and natural talent. It’s not super clear, but it’s clear enough I believe there are rules I’ll understand eventually.

In my opinion, this one source of magic is enough given how many more magical races and creatures exist in The Witcher. Ultimately these are world building choices, and both can build rich fantasy worlds, but a clear system for magic or the impression of a system, even if it’s not explicit.

Game of Thrones has a lot of characters, because a lot of them have to die, and that’s not like, a bad thing in itself, though again, there are limits to TV, so you mostly get slightly less character building. We know a lot about Yennefer and Cirilla, and a decent amount about Geralt, though I think we could use more character building for him in season two. In Game of Thrones it definitely feels like we know a few characters quite well, like Danerys and Jon and Arya, but there’s a lot of noise with characters who’re going to die before we get to know them. This is another storytelling choice, so I’m not hating, but I think it makes The Witcher a little more intimate, and you can get attached to characters, which I enjoy. 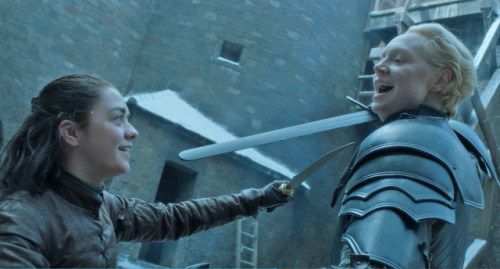 You believe in dragons but not in diversity?

So I’m not really trying to drag either show here, because this is a HUGE problem with period fantasy in general. I’m gonna blame Tolkien a little bit, but also the problem of an overwhelming majority of high fantasy settings being just Europe but magical and extra white, because apparently people think POC were invented in I don’t know, 1900? 2000?

I know Danerys had some brown friends from the slave trading states (because what the discourse needs is the implication that slavery is the fault of people of color), and I think there’s a pirate(?). I’m not gonna look it up because there should be enough and they should be important enough I don’t have to google it. In The Witcher, with one season and a comparatively tiny cast, I can think of two powerful mages and an elf, who are always cast white, so I appreciated the change (take that racist overtones of D&D. I still love you though). Fringilla is evil, but she’s strong, and she’s also a really compelling character. Triss is also a powerful mage and also a great person. I was actually googling her name and realized I forgot about Istredd too. It seems better. Also, the actress who plays Yennefer is British, but she’s also Indian. Game of Thrones and admittedly The Lord of the Rings set the bar for diversity pretty low, but it’s nice to see a show refusing to pretend medieval Europe never had a single immigrant.

I just wanted an image of the brotherhood of mages, but there are even extras who are people of color! I don’t feel like I’m in a historically segregated high school.

I also want to talk about female characters, because both shows have a lot of female characters, especially for the genre, and a lot of them are complex and great. I’m also going to ignore the last season or two of Game of Thrones because no characters made any sense and it had that problem of seemingly being embarrassed to be fantasy. “If she’s willing to murder slavers, where will the violence stop?”

Game of Thrones has very interesting treatment of female characters, and by interesting I mean pretty bad. Yes, there are a ton of fantastic female characters. I love Danerys, I love Arya, I love Brienne, but my god. There is a serious sexual assault or the threat of a serious sexual assault every single episode. I know all the arguments for this, that it’s “historically accurate” (it’s not, and the Mary Sue talks about this entire problem better than I could), that it’s a gritty show, which is a common excuse. I think obviously of Jessica Jones, but also a thousand other things. I’m not saying bad things shouldn’t happen to female characters. But does it ALWAYS have to be sexual? 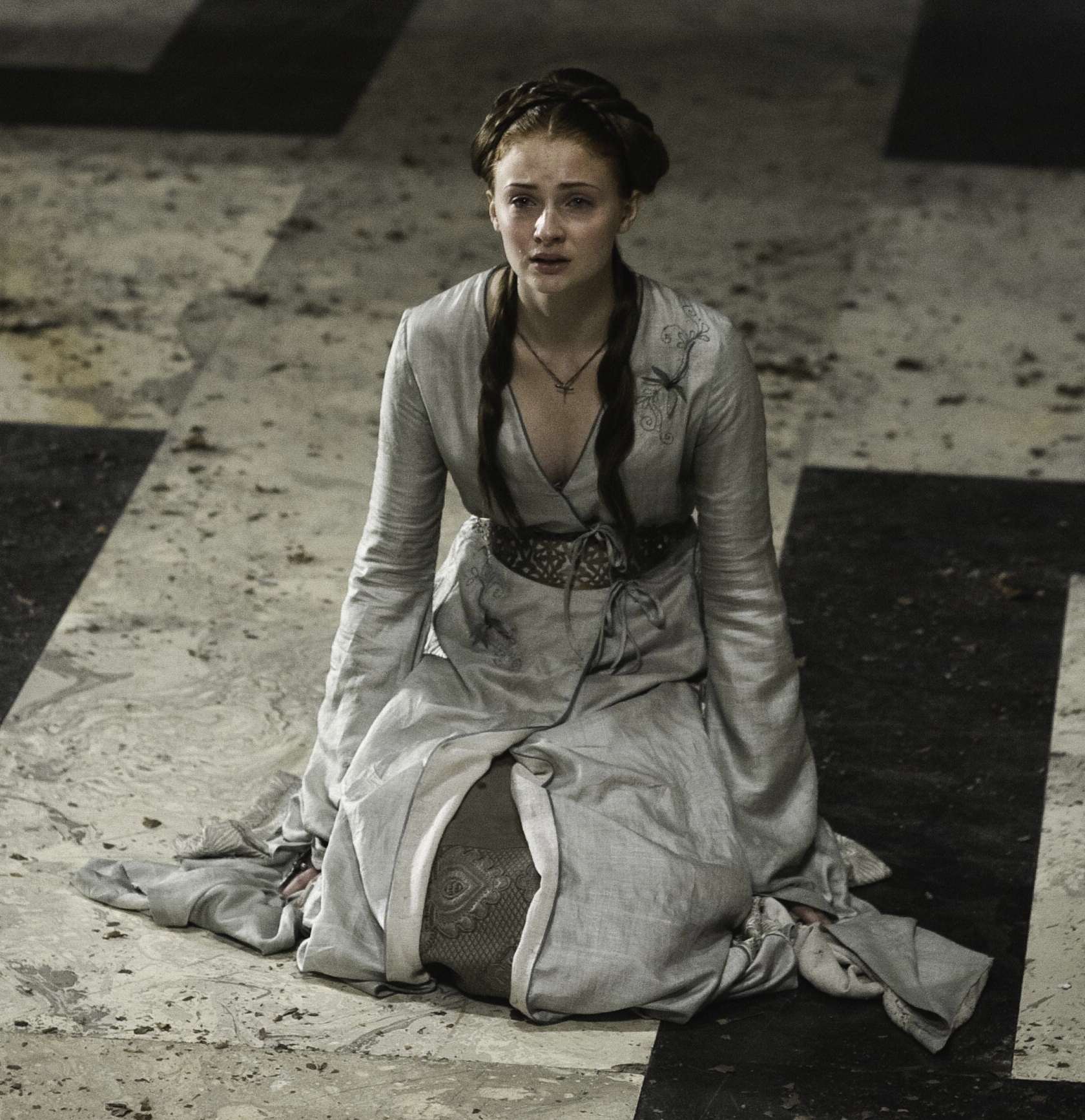 In The Witcher, the evil king wants Cirilia for her powers. They talk about Yennefer being desired by other kings for her looks, and the women she knows just as wombs, but it’s not like, well, that’s the world. Calanthe lives a super violent life, but it’s not needlessly gendered.

I want to talk about Yennefer and the whole having kids thing quickly. This is probably sexist in itself, but I didn’t really get the impression that Yennefer actually wanted children. The impression I got, based on some of the things she said and did, was that she resented losing the opportunity. A wish from the genie probably would have taken care of the organs she lost, but that wasn’t what she really wanted, because she didn’t try to get wishes. She resents her childhood, her powerlessness, the way she’s seen women be treated, and the way she’s been treated herself. She doesn’t want a baby. She wants EVERYTHING. Can you tell I’m a Yennefer stan?

I actually want to talk about female villains now. There are several good ones in each show, but I want to compare Melisandre and the Striga.

On the surface, both of these are intensely gendered villains. Geralt tells us that Strigas are always female, and she comes from her mother’s corpse womb. Melisandre gives birth to a shadow demon of some sort, and also sacrifices both a child and a baby. But I think the two characters use this very differently.

Melisandre is sexy evil. She’s wearing a slinky dress, she’s always banging Stannis, and the scene where she gives birth to the shadow is weirdly sexualized. Classic Game of Thrones! Honestly it’s classic to a lot of fantasy and other genres too, but it’s nice to see it subverted with the Striga. Sure, Melisandre is scary too, I guess, but the Striga is gross. The Striga is a straight up horror. She’s physically strong, and very nearly physically crushes the big bad Witcher. Even when she turns back into a girl, she’s incredibly unsexualized. She looks young, but we know that wouldn’t have stopped Game of Thrones. She also still looks scary. She’s completely caked in blood and mud, and she’s got horrible little shark teeth. I can’t tell you how delighted I was.

I could talk about Cirilla a bunch too but this article is already so long, I’m so sorry.

So? Is The Witcher the New Game of Thrones?

I mean yeah, kind of. We expect to have R-rated fantasy TV now, and The Witcher fills that niche Game of Thrones created, and it has a lot of the same beats – many kingdoms, swords and sorcery, and lots of sex and violence. But the tone is so different, so much more self aware, and I think the size of the cast fundamentally differentiates them. Yes and no, I guess. Yes and no.