Gone Girl by Gillian Flynn is perhaps one of the most disturbing psychological thrillers ever written. It follows married couple Nick and Amy who are about to celebrate their fifth wedding anniversary until Amy disappears. The book is written from two points of view—that of Nick and his disturbing reactions to Amy’s disappearance as well as Amy’s perfectionistic diary entries. Gone Girl is famous for a particularly unexpected twist and shocking realization that Amy and Nick aren’t who we think they are.

When I was in my late teens, I read Gone Girl for the first time, a book that obviously deals with heavy topics. It was my first time reading a truly mature, “adult” book and while I was thoroughly shocked, I wasn’t surprised. In another instance, I remember back in middle school when a fellow classmate (and very advanced reader) wanted to do a presentation on A Song of Ice and Fire for English class but was forbidden because of “inappropriate content.”

After I read Gone Girl, I was intrigued by these heavy topics and began exploring more about the book. I found a post online full of parents complaining about whether or not the book was appropriate for teens. There were numerous answers from parents responding with hard fast “NO!”s, citing the book’s foul language and intense, disturbing topics.

I became confused, as I’d had plenty of experience with these topics already outside of the book. Here’s the funny thing about the question of how much teens should be exposed to in fiction. Children and teens are exposed to plenty of vulgar language and topics in school, oftentimes even being required to debate and form an opinion on said topics. And if that isn’t enough, they’ve certainly seen graphic material on the news and are being educated on procedures in schools in the event of an active shooter. We’re even seeing the publication of entire books like This is Where it Ends dedicated to the topic of school shooters. 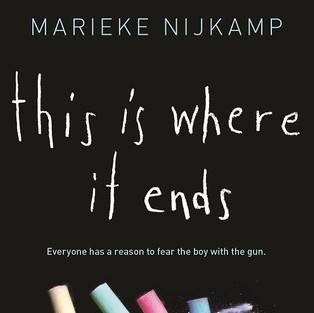 The world is changing. Children and teens are being given a voice in controversial issues, yet parents still debate over whether or not children should have fictional exposure to these topics. Here’s another funny thing: parents might think that teens as old as high school age would not understand or shouldn’t be subject to the content of a book like Gone Girl. Yet in a few years, when they turn 18, teens will be expected to be well-informed about the dangers of the real world so that they stay safe in college and the workplace. Dangers like rape, kidnapping, and abuse, all of which were themes featured in Gone Girl. Gone Girl is a work of fiction, but hearing that parents shelter their teens like this is rather alarming to me. Because what about when it comes to works of nonfiction?

Yes, Gone Girl is a work of fiction but it is good exposure. I personally found this book deeply disturbing, as most do, but also fascinating. It’s a look into the minds of two very disturbed people. A young teen might read Gone Girl and take up an interest in psychology in order to work with people like Nick and Amy. Maybe a young reader will decide to study criminal justice or analyze handwriting, inspired by something they read in the book. Hiding such information seems, to me, like a wasted opportunity. Every book we read changes us in some small way, adds a new thought to our minds. Gone Girl is an incredible book with the ability to make its readers think in new ways about people and relationships, about the crime stories we hear on the news, because none of us truly know what goes on behind closed doors.

Let’s not forget that a number of young children today dislike reading, which is extremely disheartening. Sometimes I wonder if the reason so many of them hate it is because parents or teachers are handing them books that don’t show the truth of the world today, that they feel aren’t relevant to their lives. Gone Girl is certainly relevant, I think, to today’s world of crime and broken relationships, even if it took some fictional liberties. So maybe it should be up to the teen or child themselves to decide the level of intensity and relevancy that they can handle from a book, not anyone else.